Whether it be the shortened-season or something coming to a head as it was, but the idea of blowing up some teams has been very rampant from this season. Of course, there are some teams that are long overdue for it, as their teams have been in a sinkhole for a while, but these talks have since been escalated with their lack of things happening during this short season.

One of the teams who have had a lot of talk behind them recently is the Buffalo Sabres. With Lindy Ruff being canned earlier in the season, you have to think that they are looking for a new kind of look about them. While the free-spending of Terry Pegula hasn't yielded many results-- it does yield talk about whether or not Thomas Vanek and Ryan Miller want to stick around for misfitting puzzle pieces and hope that they work. Those frustrations have one foot out the door with the both of them, the big blow-up happening as soon as this trade deadline, as their return would probably be as high as it ever will be then.

Though, while Vanek and Miller are on their way out, the big question is whether GM Darcy Regier will join them. The fact remains that regardless of what parts you move out, if you truly want a full rebuild; you have to get rid of the decision maker Regier in this. Ruff and Regier were there from the same times and you'd think they'd both go down with the ship-- but it seems that Regier somehow found a way to dodge a bullet. My guess is that he won't dodge it in the summer time, which could create quite the rebuilding ripple for the Sabres. 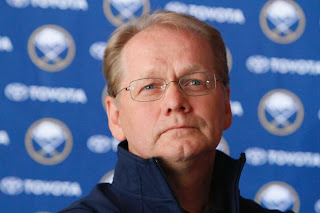 The Calgary Flames are another team that has people wondering if they need to start looking at a solid rebuilding model rather than picking up parts here and there and hoping the playoffs are in the crystal ball. Fact of the matter is that Jarome Iginla and Miikka Kiprusoff are both likely gone from the Flames plans sooner rather than later, either by trades or impending free agency (Kipper still has one more year after this)-- but they are a team in need of a full-rebuild, though it's almost not possible with their minor league affiliate not being as strong as others and draft picks not panning out as well as they thought.

With the Flames, you'd think something different would have happened with Jay Feaster taking over, but he seemed to get kneecaps by the contract he inherited. And while you can say the contracts with the No-Movement/Trade Clauses hamper him, there are some player who would probably lift it to get onto a contending team rather than floundering where they are. While many are calling for Feaster's departure, the lack of progress from the prospects can't be completely put on him, but inheriting the prospects or contract or not-- it's his job to move things around and get the right people in there to maybe give a shot to the arm of others.

Other teams, namely the Washington Capitals, could probably be looking at a sort of a rebuild-- but they're either too stubborn to do so or think this trend will work itself out. That's not always the case though, as it often takes a big shake-up to actually bring a team back to life and give them an actual turn-around.

Drastic times call for drastic measures and there are played time that many teams are way too late in picking up on their teams downward spiral. There's a fine line of thinking a team will actually "snap out of it" and noticing a complete collapse, but it's picking up on that certain thing that separates the good GM and a great GM....and also helps them keep their job as well.
Posted by ScottyWazz at 11:59 AM