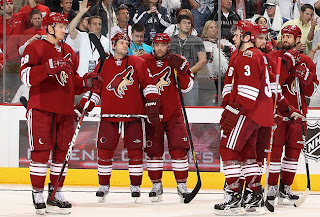 In the midst of all the Jarome Iginla craziness, the NHL did the smart thing and snuck a Phoenix Coyotes update in the middle of the whole ruckus. With this announcement, the big thing that Bill Daly actually admitted is that it's almost the time for relocation-- specifically Quebec City, Seattle, and the dark horse to end all dark horses, Kansas City. With the NHL saying they will talk to the players about it before the playoffs, as well as keep the line open to investors-- we could actually be heading towards an end game.

Of course, you have the front runners that are going to be Quebec City, who's arena is planned to be built by opening night of 2014, and Seattle, who will probably get an arena based on what happens with their NBA cohorts. However, the inclusion of Kansas City is an interesting one. Considering the AEG contingency own the Sprint Center and many owners wouldn't want to pay rent on it-- it leads me to believe that if there's some inkling of an ownership, Kansas City could steal this relocation.

The reason I think this is almost geographical. Consider the fact that the NHL probably won't go to Seattle if the NBA doesn't go there because it seems the NBA is the end all be-all for getting a new arena in that area. Also, take the point that Quebec City is out East with the Coyotes out west; the crazy realignment that has taken place already would be ruined. All this mean is that should the Coyotes move to Kansas City, it wouldn't completely break the realignment up and maybe allow Colorado to move to that more west division.

Granted, should Seattle actually get the Sacramento Kings (a decision to come by early to mid-April), then the obvious choice outside of keeping the team in Phoenix would be Seattle because it keeps that division together. One hurdle is whether or not the NHL thinks that the Key Arena is able to hold a hockey team in the meantime. Also should be noted that many believe that Quebec City could and should be the front-runner  thanks to the success that Winnipeg brought back to their area of the hockey world with the Thrashers moving to become the Jets. Even so, that whole realignment thing could really screw Quebec's chances now more than ever. You can't just move the Coyotes out east and realign again without screwing over the Red Wings or Blue Jackets, as well as making the Blue Jackets a target for relocation in the next five years, possibly.

Kansas City has often been a rumored site, especially since Mario Lemieux leveraged a visit to Kansas City in order to get a new arena in Pittsburgh, as well as the Predators being rumored to go to Kansas City during their turmoil in 2007. Yet, like I alluded to earlier, the fact the owner would not own the actual building may be the hurdle that KC has to overcome in order to fill that vacant arena. It is the second smartest move after Seattle if we're looking in terms of realignment, but the lack of the building ownership would be a huge turnoff.

However, this is all just speculation. The NHL is still fielding local ownership ideas first, which means the joy that is Ice Edge Holdings leader Anthony LeBlanc has re-emerged to look at buying the team and is working with Alberta investment banker George Gosbee to work out a deal for the team and then with the City of Glendale for leasing, which won't be an easy task. I wonder if other former suitors will come back into the fold again...but who's to say they will be as welcomed as they were in the past.

In a deal that has gone on two years too long, there's still not a clear finish line up front. For some reason, no one wants to let the Coyotes go to a new destination, but no one is working that hard to keeping them in the place they're at now. It's quite the rock and hard place that the NHL has gotten into; which is almost of their own making. Stalling on things doesn't make them magically disappear-- just get more troublesome with time.
Posted by ScottyWazz at 11:07 AM