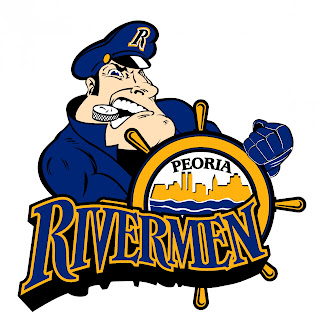 The St. Louis Blues shook up the AHL landscape a bit on Friday when it was learned that they were going to opt out of their final two years in Peoria and move their AHL team elsewhere for the 2013-14 season.

According to the rumors, the Blues will sell their franchise in Peoria to the Vancouver Canucks, who will then leave their current affiliate in Chicago for another site, rumored to be Abbotsford, BC-- which is currently home of the Calgary Flames affiliate-- the Heat. Then the Blues would move to the old Canucks affiliate, the Chicago Wolves-- who will run and operate the team for the Blues. As for the Flames-- they've been rumored to go to Utica for their AHL affiliation.

Confused enough?? Good-- that's the life of the minor league Silly Season when it comes to affiliations and where teams want to have their prospects. There are quite a few NHL teams that actually own their AHL affiliate, so when they pick a spot-- they better enjoy it for a while because odds are they'll be there for the long haul. Even so, for fans in cities where they connect close to the minor league team-- it's a stressful part of the year not knowing how many of the guys who are there this year will be playing there next year.

That's just a testament to the die-hard nature of minor league fans, who stick by their city for whomever could be their affiliate. The Norfolk Admirals were the Tampa Bay Lightning affiliate last season, won the Calder Cup, then this season-- the Bolts moved out of town and the Anaheim Ducks are the new affiliate there, but the fans have continued to come (5,119 in 2011-12; 5,403 to date for 2012-13) even with the new faces that have shown up. Conversely, the Bolts new affiliate in Syracuse have maintained the attendance, as well (5,246 in 2011-12; 5,388 to date in 2012-13).

It doesn't mean it's not as hard for the fans emotionally in terms of letting go of a group of players or affiliates or the team themselves. The Peoria Rivermen name has been around the city since the 1984-85 season in different leagues. For fans of the identity are probably hoping for the best that an ECHL or other minor league team will come through for the city to keep the Rivermen name a mainstay in the area.

Regardless of how the parent teams act, many players are as connected to their minor league city through doing community work at schools, health care facilities, and other ventures that allowed the players to reach out and connect to the community. You can bet some of those guys are just a shook up as the fans.

Yet, that's the nature of the business. You have to make sure you take care of your minor league team's travel, budget, and all that stuff-- on top of managing prospect development and the NHL side of things, too. Sometimes dollars don't add up and you have to move around the US and/or Canada to find the right spot....or the right spot for right now.
Posted by ScottyWazz at 8:41 AM