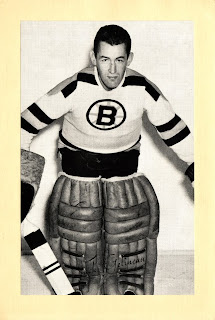 When it comes to heroes, this week's AGM could be considered one. Not for his work on the ice, though, but what he did off of it. Serving his country was something that may have put a hiccup in his professional hockey career, but what he did during the war was something more spectacular and notable. This week, the profile of Jack Gelineau.

Gelineau started his trek in the high schools of Quebec with Montreal Catholic High in the 1942-43 season before going to juniors in 1943-44 with the Toronto Young Rangers, putting together a 1-9-1 record in 11 games, while also playing four games for the Toronto CIL of the Toronto Midget League, going 0-4-0.

At the start of the 1945-46 season, Gelineau would go to play for McGill University going 13-2-0 in 15 games his first season, while helping McGill win the Queen's Cup. In the 1946-47 season, Gelineau went 10-5-1 in 16 games for McGill, while then going 14-6-0 in 20 games in the 1947-48 season. Gelineau would receive the 1st Forbes Trophy for male athlete of the year at McGill. In his last year with McGill, Gelineau went 3-3-0 in six games before graduating with a Bachelor of Commerce degree.

Also during the 1953-54 season, Gelineau's rights were traded from Boston to the Chicago Blackhawks, where he played for two games and lost them both.

Gelineau passed away in November 1998.

A hero in the war is what Gelineau should be most noted for. While he did have a brief time in the NHL and some success in the senior leagues, it wasn't as widely noted as his time with the Royal Canadian Air Force.
Posted by ScottyWazz at 8:00 AM