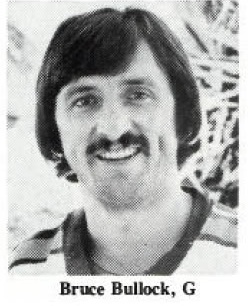 As the NCAA Selection Sunday for hockey was named yesterday, this week's AGM was a stud in the college scene in his time, while being recognized for his short-tenure as a goalie of the decade. While his NHL career was short-lived, he'll forever live in the memories and record books of the fans of the 1970s. This week, the profile of Bruce Bullock.

Bullock first came onto the scene with the Clarkson University Knights in the 1968-69 season, where he would play in 28 games and finish with a record of 19-7-2. During the 1969-70 season, Bullock had a huge year going 25-2-0 in 27 games, helping lead Clarkson to the NCAA Finals, losing to Cornell. However, Bullock was named to the All-Tournament Team and the NCAA East All-American Team. For the 1970-71 season, Bullock played amazing again-- posting a 28-1-1 record in 30 games, leading Clarkson to the ECAC title game, but lost to Harvard. Despite the loss, Bullock was against named to the NCAA East All-American Team, as well as the ECAC First All-Star Team and ECAC Player of the Year. He was named to the ECAC All-Decade Team for the 1970s.

Bullock left Clarkson and signed on with the Chicago Blackhawks starting in the 1971-72 season. While demoted to the Central League's Dallas Black Hawks, Bullock went 0-2-1 in five games before Chicago would sell his rights to the Vancouver Canucks. Bullock moved to the Western League to play for the Seattle Totems and would finish the 1971-72 season with a 3-7-0 record in 10 games there.

During the 1975-76 season, Bullock played first for the North American Pro League's Beauce Jaros, playing in 19 games before catching on with another Central League team, the Tulsa Oilers. With the Oilers, Bullock when 13-3-0 in 17 games and a perfect 6-0 in the playoffs to capture the Adams Cup. At the end, Bullock won his last eight regular season games and all six playoff games-- the longest win streak for an Oilers goalie until Rod Branch broke that record in 2002.

The Pacific Hockey League was Bullock's last destination, playing with the Phoenix Roadrunners in the 1977-78 and 1978-79 season for a total of 62 games. In the 1977-78, Bullock was named to the Second All-Star Team. After this, Bullock retired.

While his promising college career was not indicative of his professional success, what he didn't get in the NHL, he made up for in the slightest for his minor-pro career. With a record that stood for 26 years, Bullock can rack up his lack of NHL prowess on an expansion team and too many cooks in the front office kitchen.
Posted by ScottyWazz at 8:00 AM

He was also named to the top 50 players in the ECAC in the past 50 years. The other two goalies were Ken Dryden and Tim Thomas.