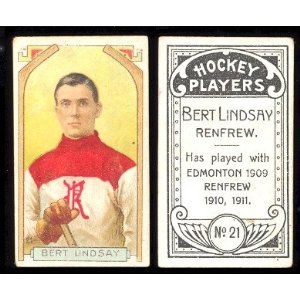 Kicking it old school this week, we go to the start of organized hockey in North America and to a time where goalies had a rough times finding work, then keeping work, then searching out more work-- which could be across the country for some. That's what this week's AGM did, searching west before finding his niche. This week, the profile of Bert Lindsay.

Starting off with the McGill University Redmen, Lindsay played three seasons from the 1903-04 season until the 1905-06 season, posting a 5-7-0 record in his 12 appearances before moving onto the semi-pro ranks. In the 1906-07 season, Lindsay played for the Renfrew Rivers and the Latchford Pros.

During the 1907-08 season, Lindsay played four games for the Renfrew Creamery Kings and went undefeated, as well as playing for the Brockville Invincibles, winning the only game he played for them in. With the 1908-09 season, Lindsay started with the Edmonton Professionals, playing in three games as exhibition and winning them all, as well as being in net for Edmonton's challenge for the Stanley Cup; which they would lose to the Montreal Wanderers in their two game match-up. Also in 1908-09, Lindsay played again for the Creamery Kings, going 6-0-0; while also playing a game for the Strathcona Pros in an exhibition game, which was a loss.

Though he was picked up by the NHA's Toronto Tecumsehs, Lindsay moved out west to play for the Pacific Coast Hockey Association's Victoria Aristocrats in the 1911-12 season, going 7-9-0 in his first season there. For the 1912-13 season, Lindsay went 2-1-0 in three exhibition games, while the season for Victoria brought him a 10-5-0 record in 15 games, allowing him to be named to the PCHA All-Star team. During the 1913-14 season, Lindsay had another 10-win season (10-6-0) and help lead the Aristocrats to the Stanley Cup challenge against the Toronto Hockey Club, which they would lose all three games they played. It was a very down year for Lindsay in the 1914-15 season, posting a 4-13-0 record in 17 games, while also going 0-2 in the games he played with the PCHA All-Star team.

Moving back east, Lindsay signed on with the Montreal Wanderers of the NHA, posting a 10-13-0 record in the 23 appearances in the 1915-16 season. For the 1916-17 season, Lindsay had a 3-12 record for Montreal. Lindsay and the Wanderers moved to the newly formed NHL in the 1917-18 season, but they only played six games, in which Lindsay played four (1-3-0) before their arena burned down and they were unable to finish the season.

After an abrupt end to the previous season, Lindsay signed on with the Toronto Arenas for the 1918-19 season, playing in 16 games with a 5-11-0 record. After that season, Lindsay would retire from hockey. Lindsay was the father of Hall of Famer Ted Lindsay and passed away in November of 1960.

While he went back and forth in the leagues in order to find work, Lindsay was able to actually get into a couple of Stanley Cup challenges, despite not winning either. Yet, as he went along, it got a little rougher as more competition came though the PCHA and NHA. Not the best goalie, but a serviceable one who got the wins he could with the team in front of him.
Posted by ScottyWazz at 8:00 AM