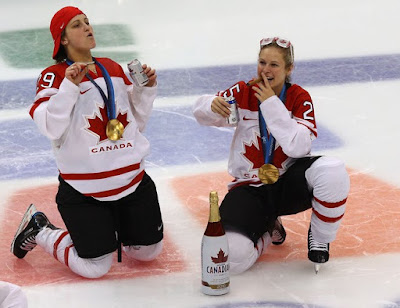 The hot topic is not that the Canadian women's hockey team won the Gold Medal yet again in the Olympics, but the aftermath that happened. It seems that the ladies stayed at GM Place (or Canada Hockey Place if you're daft and hate sponsors) and lived it up on the ice-- with brews, stogies, and hanging out on the ice and chilling like villains on the ice afterwords.

The one picture that seemed to peeve a lot of people was of Marie-Phillip Poulin was drinking a beer while she was only 18 years old, a year younger than the British Columbia drinking age; but is the age of drinking in her home province of Quebec. It seemed to upset Adrian Dater, who posted on his blog on Versus about what he would have to explain to his kids about it and why the post-game celebrations aren't banned by the PC cops already, because they should be.

I'd like to thank Dater for channeling Helen Lovejoy from "The Simpsons" when writing this.

Here's my thing, what's the big effin' deal with all of this?? It's not like Poulin is the first person to ever drink without being of age-- I mean, that was most people's high school lives. We've had enough teen-angst movies that displayed that, does that mean those should be banned, as well?? That's just something that is as common as the sun rising in the East and the Leafs not winning a Cup. Maybe these critics just can't remember their teen years due to drinking themselves stupid and can't remember how awesome it was.

And let's be honest-- let them live it up. They just won a goddamn GOLD MEDAL AT THE OLYMPICS!! That's instant cause for celebration and they should have lived it up. What better way to live it up than on home soil, on home ice, then just hanging out until they kick you out. It's not like anyone is going to rush stuff to get them out, especially since it's the home team. If this was in Torino, then you could see them getting rushed off, but let the ladies celebrate because they pretty much dominated the World and should celebrate for being at the top of their sport.

This is a non-story. They didn't wreck the ice, they didn't break the glass, the didn't shot-put a couch out the Nagano Olympic Village after not medaling (shoutout to Chris Chelios); they just celebrated the way anyone would celebrate when winning a championship. Hell, beer league teams do it all the time-- win, lose, championship or first win; it doesn't matter. Anyway-- they are just doing what any WINNERS would do-- live it up because you never know when it'll be crashing down.

For the slideshow, check out Yahoo's picture gallery of it.
Posted by ScottyWazz at 11:25 AM