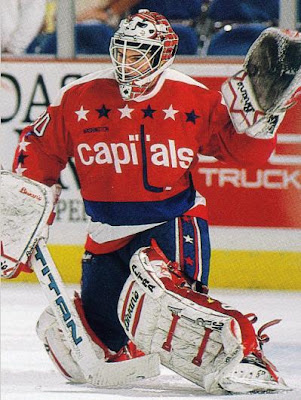 While he came out of nowhere to the top in a flash, his career ended just as quick. There's a time where he didn't want to play anymore and just be done with it all, but like many AGM's you have to wonder where it went wrong. He'll forever be immortal to Caps fans, as well as the NHL world; plus he can get confused with someone more successful, in the process. He's also on the FOHS Wall of Fame.....or at least his Starting Line-up is. This week-- we look at Jim Carey.

Coming out of Dorchester, Massachusetts; Carey really got the eyes on him playing in high school for Catholic Memorial, as he went 48-2-0 in his his three years there from 1989-90 until 1991-92, with 12 shutouts to his name. It was good enough for Carey to get Drafted in the 1992 Draft by the Washington Capitals in the second round, 32nd overall.

Even though he was drafted, Carey had decided to go to the school route by heading to the University of Wisconsin to get some time in there. Starting in the 1992-93 season, Carey got plenty of time with the Badgers in net-- as he played 25 games in his freshman year and going 15-8-1, enough to prove his guile. His first-year play got him some solid merits-- like being the WCHA's Rookie of the Year, named to the WCHA All-Rookie team, and the WCHA 2nd All-Star team. Carey parlayed that into more time in his sophomore year, getting 39 games in and going 24-13-1 for the year. With all his work done, the 1994-95 season saw Carey make the leap from the amateur ranks to the pro ranks.

With the lockout, that meant that Carey had to start his career with the Portland Pirates, the Caps farm team at the time. With the Pirates, Carey showed his stuff and shocked a lot of people in the AHL, playing 55 games and going 30-14-11 with six shutouts and a 2.76 GAA. The Caps were so impressed that they called up Carey in March of 1995 and went 18-6-3 for the season, displaying the classic case of the unknown goalie stumping the league. However, his rookie year in the AHL, Carey was able to get the Red Garrett Award for AHL top-rookie and Baz Bastien Award for top-goalie in the league.

With those accolades, the Caps spent no time to promote Carey to the starter's role. In the 1995-96 season, he did not disappoint. Carey played in 71 games for the Caps, went 35-24-9 with a 2.26 GAA and .906 save percentage. Those numbers were good enough for Carey to capture the Vezina Trophy, becoming one of the most unlikely winners of the award. Things were riding high for Carey, as he was a cult hit in the DC area. With the rise of comedian Jim Carrey in the entertainment industry-- the nicknames were readily available. The fans started to call him the Net Detective, as well as Ace, an homage to the Jim Carrey movie; "Ace Ventura, Pet Detective." He was on cloud nine, but like most AGMs-- it all came crashing down in an instant.

The 1996-97 had a lot of buzz for Carey, but he got off to a slow start for the Caps. While his GAA was 2.75, his record in Washington didn't compliment that, as he was 17-18-3. The Caps needed to do something, so the Caps decided to deal him on trade deadline day. They found a buyer in the Boston Bruins. The Bruins were interested because of Carey's credentials and the fact he grew up in the Boston area. Sadly, with the trade-- the Bruins forgot to get his confidence with it. From the trade until the rest of the season, Carey played in 19 games for Boston and went a disappointing 5-13-0.

When Pat Burns got the head coaching gig for the Bruins, Carey was usurped by another former Caps goalie-- Byron Dafore. Carey was sent down to Providence in the AHL to help him get his game back for the 1997-98 season, but it didn't seem to help much. In the AHL, Carey went 2-7-1 in his ten games; though the ten games in Boston yielded a 3-2-1 record. That showed that there is a possibility for a return to greatness, but it wasn't to be in Boston, it would seem.

The 1998-99 season saw Carey start with Providence again, but he looked real good again. In his 30 games in the AHL that year-- Carey put up a 17-8-3 record. It was good, but not good enough for the Bruins, who released him on March 1st. However, it was a matter of hours before he was picked up again, as the St. Louis Blues took a chance on him. Yet, Carey only played four games for the Blues (1-2-0) before being sent down to the IHL's Cincinnati Cyclones. That's where it all ended, as Carey only played two games, going 1-0-1 before falling to a serious inner-ear concussion. Carey didn't finished the season and faded away from hockey.

In a July 2000 article in the Washington Times, many had wondered what happened with Carey. He wasn't interview personally, but former agent Brian Lawton did talk and told about how Carey wasn't like most of young, rich athletes:

"Jim made $800,000 or $900,000 the year he won the Vezina and then he signed a four-year, $11 million contract. And Jim has done so well with his investments that he doesn't have to work. He's working on his business degree at the University of Tampa and looking to get involved in the financial world. It's disappointing that Jim didn't persevere because he still had a lot to give to the sport. Despite everything that had happened, 24 was too young to leave hockey."

Carey was said to be able to get in shape in no time, but he never wanted to. Right now, Carey is the CEO and President of OptiMED Billing Solutions, which is a medical billing company in Sarasota, Florida.

While it seemed that Carey could transition, it seemed that he could only do that on his own terms and with his qualifications. When he would get traded or released or demoted, Carey never reacted well; thinking he was in the wrong and never could get his confidence back. When he was about to get it fully back-- Carey would be on the move again and he'd have to start all over. While he seems to have found his calling now, it's fitting he's the CEO. He can call his own shots and do what he needed to in order to succeed, without anyone telling him otherwise.
Posted by ScottyWazz at 8:35 AM

A couple of things to add...

Carey was brutalized by the Penguins in two playoff series with the Caps. 2-4 with 4.19 and .834 in 1995. 1996 wasn't any better as Carey kept getting yanked for Kolzig in that series that featured the four OT game (Carey did not play).


That more than anything else led to his downfall. The Caps messed around with his style after the 1996 season and really threw him off his game. Add in the anemic at best offense he had in front of him and it is no wonder he lost his confidence because he was asked to pitch a shutout every single night.

And as the late great Paul Harvey would say, and now you know the rest of the story...