Today, two new AHL affiliations with NHL clubs were announced. The announcing of these affiliations give the NHL and AHL 30 teams in the leagues, with every team having a direct affiliate without having to split-off of another team.

First, the Columbus Blue Jackets announced they wouldn't be with the Syracuse Crunch any longer and move their affiliation to Springfield and the Falcons. The deal is for one year with a one-year option following it. The Falcons were abandoned by the Edmonton Oilers after the Oilers announced they would be moving their affiliate to Oklahoma City. The Jackets will be responsible for all hockey operations, which means coaching, front office, the whole shebang. Of course, the one-year deal could mean that the Springfield team could be relocated after one or two years-- but it remains to be seen.

So, with the Syracuse Crunch not having a NHL team and the Anaheim Ducks not having an AHL affiliate; it was a match made in heaven. The Ducks announced a multi-year deal in affiliation with the Crunch. The Ducks will just have to stock the Crunch with players, as the Crunch are an independently owned franchise, the longest in the AHL.

What was one thought as far-fetched is now reality with every NHL team having an AHL affiliate and don't have to worry about the whole split affiliation and players not getting the time they should or what-have-you. It also gives me a chance to update my list on distance of affiliation. 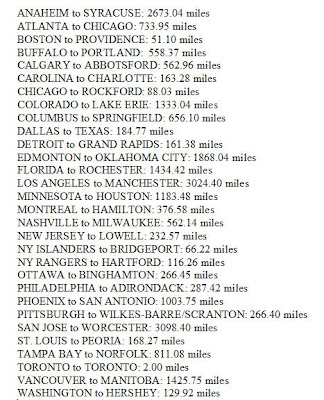