Which Way To Playoff Futility?? 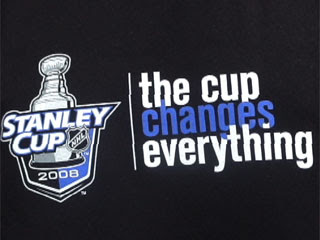 I brought up a question in the Yahoo Puck Daddy Chat about whether or not it's better to clinch a playoff spot early and rest up the players who will be crucial to the playoff run or if it's better to clinch on the very last day and have the playoff mentality of do-or-die already instilled into their persona going into the mission for 16 wins. You could go either way with this topic, as it really brings out a lot of chin scratching and the like to it.

I'll start out with the guys who are the last to reach the party. The good thing about already scratching and crawling to the final playoff spot is that the players from top to bottom already know how much sacrifice they'll have to put in order to get to the ultimate goal. They have the "in the trenches" feeling to them already so they'll be able to know how important the games mean. Granted, that kind of fighting going into the playoffs could wear down the team, both physically and mentally, and really ruin a decent playoff run. Albeit, that's a seemingly nice cop-out ideal, but if they can push to six or seven games in the process; both teams are going to be drained coming out it. That's the trials and tribulations of the playoffs. Frankly, if you do all that scratching and crawling and not make the playoffs would be harder to take than making and getting ousted in the first round. Of course, I'm not playing, so I have no right to say one way or another.

On the flip side, the team that clinches early won't have the automatic pressure and feeling they could be on the outside looking in when they wake up in the morning and look online. They can go through the motions and actually try to fix all the loose ends they have in their game, if any. You can always use practice (so to speak) at game speed and use different people in different situations, just to see what they are made of and what guys can do in different situation. Plus, if the guys need rest, then they'll be able to go through the marathon of the playoffs. Conversely, if they let their guard slip a little bit, they could get out of their groove that got them to the point to clinch so early and be proned to an early exit and endure the questions of underachieving, isn't that right San Jose Sharks?? Sure, the competitive nature runs deep in some teams, but the fact we've seen a lot of upsets and surprising teams in the recent playoffs, you can never really let your guard down. Even if you lose one spot in the standings, it could spell disaster and upset for those in the higher ranks.

It really depends on how you look at it and what kind of mentality you have. There's going to be different opinions on each, while at the same time-- you can have both sides of it all; much like I'm doing here. Even with it, I'm still trying to figure out with is better. I guess it depends on what the make-up of the team is, what the expectations of each team is, and the motivating factors going for it. While you may not think it, some incentive could go a long way to win Lord Stanley's Cup.

So, have at it-- let me know what your take is on it and which way you think is better when going into the playoffs.
Posted by ScottyWazz at 1:15 PM