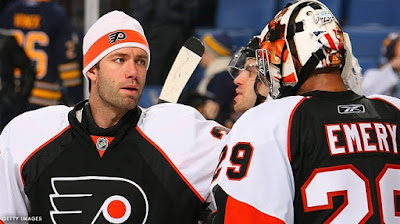 Oh, Philadelphia. What hockey deity did you upset in the last decade to give you the issues in net that you've had?? Even though it seems other teams seem to be have a revolving door in net (as I stated before with the Nashville Predators), but when other teams have some sort of plan in place; the Flyers just seem to be flying by the seat of their pants.

This year, for example, they parted way with their '08-'09 tandem of Martin Biron and Antero Niittymaki and went with returning for the third-time back-up Brian Boucher and took a risk with the returning from the KHL Ray Emery. The Emery project seemed to be getting off to a good start, going 10-3-1 in his first 14 games, but when he got sidelined with a hip injury, the Flyers turned to Boucher for a bit, who struggled with a 4-8-0 record, the Flyers took Carolina Hurricane cast-off Michael Leighton off waivers and Leighton shined with the Flyers going 16-5-2 in Emery's absence. While Emery went 5-3-0 before being put out for the season, things looked nice with Leighton playing. That's when the house of cards came falling down, as Michael Leighton is out 8-10 weeks with a high ankle sprain. That would put Leighton's return at mid-May at the earliest. This leaved Boucher and unproven pro and pride of Silver Spring, Maryland Jeremy Duchesne as the goalies for the Flyers. A team that many thought would make a move for a goalie at the deadline, never did.

Though, when you think Philadelphia-- many things jump to mind. Cheesesteaks, rowdy fans, and goalie issues. Since the lockout, Robert Esche, Antero Niittymaki, Martin Biron, Martin Houle, Emery, Boucher, and Leighton (twice) have been in net for the Flyers. If you even trace back before the lockout until the 1999-2000 season; add Jeff Hackett, Sean Burke, Neil Little, Roman Cechmanek, Boucher again, Maxime Ouellet, and John Vanbiesbrouck. That's 13 goalies in ten seasons. While it's not out of control in terms of size, it is a little suspect how none of them could really stick around for the long-term. While you can say it's a matter of not having a consistent team around them or the pressure on being the franchise keeper could be factors, yet at the same time; you'd think you throw enough stuff against the wall, there's something that's bound to stick. You can even say that since Ron Hextall, there hasn't be a goalie who has been capable to carry the Flyers banner-- and he stopped being a starter after the 1998-99 season.

While Johan Backlund does show promise, who's to say how long it will take in terms of making him the starter for the Flyers. Outside of Backlund, there doesn't seem to be much around the corner. Duchesne is very unproven, Michael Teslak is starting to come on his own in the ECHL, but is a ways away, Jakub Kovar is in the Czech Republic, while Major Junior goalie Nicola Riopel played very well with Moncton, but had his issues in Adirondack early in the season. The transition for most of these guys will be rough and may never come at all.

Though, it can't be put on them. Philly is a demanding city and the front office knows that. Odds are, these young guys will toil a while in the minors or juniors and never get the chance to make the club because the Flyers are serial free-agent goalie signers. Odds are they will never have the chance and maybe ruin some of these guys leaving them in the minors longer than they need to and risk have them going overseas or have them bolt in free agency. But that's life in the City of Brotherly Love. There's never seen to be any net gains, but more net congestion.
Posted by ScottyWazz at 1:00 PM