The Lack of Downie Uproar 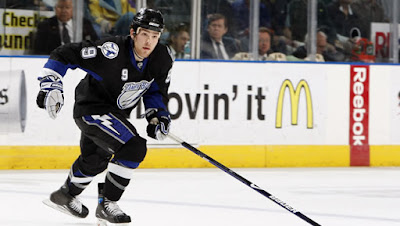 In the midst of the suspension to Alex Ovechkin, which is something well-deserved because it was a touch from behind, the thing that is going overlooked is something that happened later that day and could have been more serious.

If you haven't seen the "hit" Tampa's Steve Downie put on Sidney Crosby, you can check it out here from this clip. The thing that's with this, there is MUCH more intent to injure a player than Ovechkin's hit was and there was a deliberate targeting of a player while the play was across the ice. As my friend Kim pointed out, if there was ever an example of deliberately attempting to injure a player-- that play was it. Thankfully, Crosby's leg didn't snap like Joe Theismann's but the fact it could have been much worse than it was is the point.

As of right now as I post this, there has been no report about Colin Campbell wanting to meet with Downie to talk with him, no indication that the hit was even something on the NHL's radar; which is should be since it involved their promotional focal point both on and off the ice in Crosby. While only a two minute call was given to Downie, it doesn't mean his penalty after the fact cannot be worse. What's even more interesting is this comes a week after everyone was praising Downie and his play on the ice and how much he's improved. Interesting how things can change in an instant.

The thing is that we've seen this blatant inconsistency from the NHL and even the severity of the injury and the name has nothing to do with it, as we've seen in the past week where Matt Cooke gets nothing for ending Marc Savard's season and thensome and got nothing out of it. Both Cooke and Ovechkin are past offenders, but it seems that it really how Colin Campbell is feeling from hearing to hearing.

Odds are, we won't see anything happen to Downie, especially if nothing has been said now. It's not like Downie has been a multiple offender, but much of his play has been questionable at best. It's stuff like what Downie has been pulling that makes discussion of rule changes happen. It's one thing to go after a head deliberately, you almost have to put the legs into the same boat as well-- especially when it comes to a player who relies on his legs like Crosby for agility and finesse for his game. That's why there's so much uproar on knee-on-knee hits because it's a dangerous play and could do much more damage in the long-run than meets the eye.

Until the NHL gets a little more streamlined about their discipline, everyone has the right to mock their stances from one ruling to another. The Downie incident is much more severe than what Ovechkin did and as of now, he is getting nothing. Ovechkin should have be sat for what he did to Brian Campbell and Steve Downie should sit for what he did to Crosby. If the NHL wants to send a message and curtail anything that happens in the future-- this is the time to do it before it's much too late.

I completely agree ... we talked a bit about it yesterday, and this is the first time I've really cared for Crosby's well being. That was absolutely crazy on Downie's part.