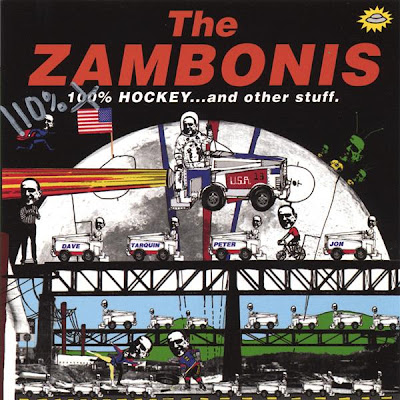 There has been some kind of influx in the past few weeks of specialty music items in terms of goal songs or event music, which I have recently come to my attention. The first is the Washington Capitals goal song and the IIHF having a song for the World Championships in Germany this year.

First, the Caps goal song, which local DC area artist Sandbox Kings won during a contest in conjunction with DC101 and Elliot in the Morning show. Now, the Caps have had plenty of post-goal songs after the legendary siren; like Blur's "Song 2" and of course, Gary Glitter's "Rock N' Roll Part 2." Yet, while those are very close to sports in every facet; this new "Rock the Red" goes in an odder direction. The song, which you can find on the band's MySpace doesn't seem to fit that same mold as the previous two. In fact, I would go to say that it would be better placed for a video montage before the Caps hit the ice for each period, but not after a goal. The reviews, at least those close group of people I know, have been bad. They did not seem to like it for a goal song and while I'm not in the area, rumors say they aren't even using it anymore-- again, no clue if that's true or not. It's a shame, because I'm sure these guys wanted it to be a staple. That's business, I suppose.

Secondly, the IIHF commissioning a song for the World Championships in Germany. The song is called "Stuck on Replay" by the band Scooter. The IIHF's presser said that they have 25 million recordings solds, 23 top-ten hits, and over 80 gold and platinum records across the world-- yet, this is the first time I've heard of them. The video is littered with compliated clips from past World Championships, but the song is the techno/sing-along genre we almost expect when it comes to the German musical scene. While the verse does bring a little more up-tempo feel to it, the chorus slows way down and allows for the fans to join in....which I'm sure will go over as good as the Hockey Canada/Pepsi cheer from this year's World Juniors.

The most iconic of made up songs could be a very unofficial song in Calgary as the Flames made their amazing playoff run in 2004. It was made by local Top-40 station Vibe 98.5 called "In Da Dome" and it does a decent amount of parody and....ridiculousness. The production is definitely amazing and it's as good as it can be for a song about a hockey team can be. It got a lot of airplay in Calgary and soon went around the world. They did their job with it, so it had to be deemed a success.

There hasn't been many hockey song in the mainstream. You have the obvious "Fifty Mission Cap" by The Tragically Hip about Bill Barilko's disappearance and all of that. Then you have the dedicated hockey band The Zambonis, which such underground hits like "Bob Marley and the Hartford Whalers." Other than that, I can't think of many hockey related song, outside of a small mention of them. I just wish there was more of a market for it....especially in Canada, you'd think there'd be more.

So, what say you-- does your team have a specialty song for themselves or is there some kind of unofficial song out there about the team, a parody of a pop-song, if you will?? Put it in the comments, then.

Also, check out Hockey Music for some of the most used/overused songs.
Posted by ScottyWazz at 2:20 PM