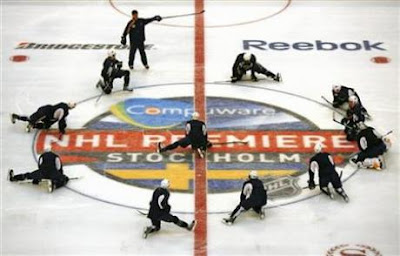 Okay NHL, we get it-- you want the European market. But it's a bit rough when you're trying to grow the brand overseas when it's not completely sold in some of your markets Stateside. I don't get how taking a home game away from six teams helps grows the game where you need it. In actuality, it could be doing detriment to the team's well-being.

If you haven't heard, the NHL will be holding games in three European locations to start the season, with the Carolina Hurricanes taking on the Minnesota Wild in Helsinki, the Columbus Blue Jackets and San Jose Sharks going at it in Stockholm, and the Boston Bruins and Phoenix Coyotes dueling in Prague.

While the NHL could call this whole gimmick a success, it almost seems like they're beating a dead horse in terms of locations. They've done all these cities before, the second year in a row for Helsinki and third year in a row for Stockholm. The best part about the first games in London was the exposure of the game to a place who wouldn't have that caliber of hockey in their country. Same goes with the games in Japan in 1998, giving top-notch exposure to a budding hockey nation. You'd think that if the NHL wanted to get the exposure throughout the European Union, they'd diversify where they would go. With emerging countries like Switzerland, Germany, and Slovakia-- those could be the countries you'd focus on getting more exposure to. Imagine the Washington Capitals and Chicago Blackhawks playing at HC Davos' Vaillant Arena for their game; magical. How about taking on the KHL in their backyard of Russia or other fomer Soviet satellite countries?? That'd be something for them to go head-to-head.

Along those lines, you have to question if the allure of it will be going down as the year's go on. The question comes about when it comes to the idea of multiple outdoors game, but with the Winter Classic being the only game for it, the allure and want to go play in it is there-- as is the excitement. With the European games, it's very taxing on the players with all the air-time they'll be logging, thus making them tired early on and could handcuff them for the rest of the season if they lose crucial points in the early season. To travel that much in the early part of the season when players conditioning isn't at the peak, it's more of a hinderance than anything.

We'll have to see what will happen for the 2011-12 season and if they expand it to eight team in four cities or whatever. The really craptastic side is if the NHL doesn't do anything with this exposure in Europe or doesn't have an NHL Europe like has been thrown out there for a while. It would almost seem like a waste of time if nothing bigger comes from this. Is there going to be a time were we'll have 15 cities hosting all 30 teams in a European Vacation for the NHL?? Only time will tell.
Posted by ScottyWazz at 10:05 AM

Holy crap, I didn't realize those were the teams that were chosen, it's a who's who of no-name teams (well, except Boston and San Jose).