"Better Off Eliminated" or "How Front-Runners Got Served" 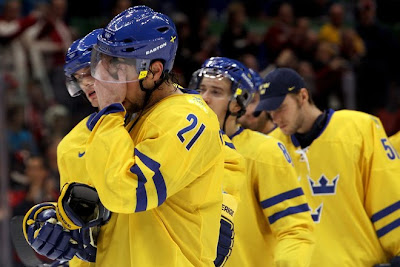 Three of the four teams who were in the medal rounds in 2006 have been eliminated. One through an upset, one through clash of the titans (which was one-sided at best), and one through losing a tough game against the last of the four teams in the medal round of 2006. While there are plenty a questions a bound about the games themselves, you have to figure out if this is good for their club teams heading into the playoff stretch.

RUSSIA: The Russians had their asses thoroughly handed to them by the Canadians, which showed that there is no "D" in Russia. While they had offense for days, the Russians couldn't get it going against a tight checking Canadian squad and couldn't stop the speed and grind of the team. Yet, with half the team being NHLers, and commonly the best players on their team, the clubs must be happy. The Capitals especially, who hope that the failure of the Olympic will fuel and anger the like of Alex Ovechkin and Alex Semin, which will make them even more dangerous. Granted, it could make them fall into a deeper funk, but for Caps fans-- let's hope not. Oddly enough, Ilya Kovalchuk was pretty much silent and invisible for the tournament, which can't be very promising for the Devils and their fateful. However, Evgeni Malkin was the leading scorer for the Russians, which will give the Penguins a nice boost after his struggles during the season. Another question will be how the the onslaught of goals will effect Evgeni Nabokov. With the Sharks in control of the Western Conference, you have to wonder if his psyche of not coming through in the clutch will continue when the playoffs come around again.

SWEDEN: With the Swedes only giving up two goals in the the three preliminary game, the shock of Slovakia putting up four goals and then beating the last Gold Medal winners was even more of a shock. Though, it does validate the thought of the people who thought the Swedes wouldn't be much in these Olympics. Henrik Lundqvist looked very good for the Swedes in his two games prior, but somehow the Slovaks were able to get to him, especially in the second period of their game. With Lundqvist's struggles-- this could only break more Rangers fans hearts down the stretch. Two bright sides would be the emergence of youngsters Nicklas Backstrom and Loui Eriksson, who would be the guys who carry the flag of the Swedes in the future. Backstrom is already a star with the Caps, while Eriksson's performance continues the breakout role he has been having in Dallas, which should give some kind of relief to the Stars, who haven't had much to write home about this year. It's also the changing of the guard, as this is likely the last time we'll be seeing the likes of Nicklas Lidstrom, Daniel Alfredsson, and Peter Forsberg representing the Tre Kronor.

CZECH REPUBLIC: I thought that the Czech could be a squad to look forward too, which was partial true. Yet, at the same time-- they couldn't beat the higher tier teams like the Russians or Finns in these games. While their troubles could be tracked back to the fact that Marek Zidlicky was their leading scorer, the fact they had the fire power of Jaromir Jagr, Martin Havlat, and Patrik Elias; they could have done a lot more scoring than they actually did. Tomas Vokoun could only do so much for that team to keep them in it, he never got too much support when he needed it. Vokoun faced more shots than all the goalies except three: Edgars Masalskis (LAT), Jonas Hiller (SUI), and Pal Grotnes (NOR). Vokoun's GAA was only 1.78 in his five games, which probably boosted his trade value in the NHL once he gets back. Maybe he shouldn't unpack, actually. Yet, you have to wonder what could have been if guys like Roman Hamrlik, Vinny Prospal, Michael Frolik, and Jakub Voracek would have been on the roster, as super agent Allan Walsh pointed out on his Twitter.

But, with all being said and done-- we're not down to four. While these three teams could be considered disappointing-- especially since Sweden and Russia are the big name teams-- there's still four good teams out there, which should create for some buzz; especially if the USA and Canada play each other again. Of course, it may be for a Gold Medal or Bronze, who's to say. Just have to wait until Friday, I suppose.
Posted by ScottyWazz at 12:10 AM