"Ilya Rental-chuk" or "How Much Will You Give Up??" 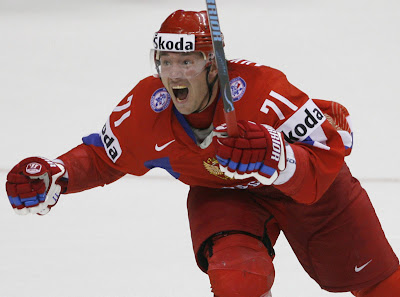 If you're on Twitter (like me) then you know that the whole thing exploded when RDS and then TSN came out with the story about Ilya Kovalchuk meeting with Don Waddell and basically being told he was going to get dealt. There are many teams apparently interested, but let's not kid each other; who wouldn't be?? Yet, the serious contenders seem to be around the five team clip.

Even with those five teams in, the question now becomes will the team who ultimately deals for him be in the position to actually give up what the report is asking for in terms of the price of Kovalchuk??

Rumors came out saying that the Thrashers were asking the Kings to give up Jonathan Quick, Wayne Simmonds, Jack Johnson or Oscar Moller, and prospects, which would include Brayden Schenn. If that's not giving up a lot for a guy who will play maybe 20 regular season games for you, I have no idea what is. Even if Kovalchuk did re-sign with the Kings, that's still way too much to give up; especially Quick, who has been stellar for the Kings this season and solidified his number one spot for the club. Had Dean Lombardi pulled the trigger, he could have been run out of town by people who don't even live in his town and Waddell would have more years of job security.

Even so, there's teams out there who are willing to pay the price. Craig Custance of the Sporting News says that the Thrashers are in a playoff chase and will ask for what they believe will be fair market value for giving up a player like Kovalchuk and not hurt their rank in the standings. While that's a valid point, I don't know how many teams would be willing to give up the farm just to get someone like Kovalchuk. Sure, the guy has incredible skills, but are you going to risk the chemistry of a team and the bodies on the team for a guy who won't be staying for more than six months?? That's the question GMs are going to be asking themselves as they ponder what to do.

Yet, the wheels are finally starting to get into motion after months of jockeying for position between the Kovalchuk camp and the Thrashers and finally-- something will get done here; probably before the week is up. Now, it's just a matter of who, what for, and then the questioning of whether or not it was too much and whether or not Kovalchuk will re-sign in the end with his new team.
Posted by ScottyWazz at 3:20 PM