Don't Czech Out Until It's Finnish-ed 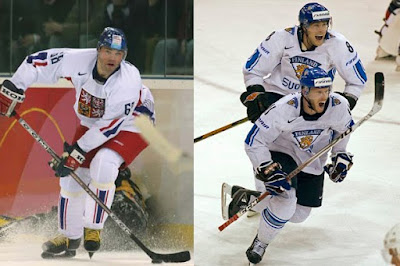 The boys of the FOHS and I were talking about a pool that Marc "With a 'C'" is in when it comes to the Olympics. While he could only pick four skaters and two goalies-- it seemed that we all overlooked a couple teams at the start of it. However, looking at the rosters; it's a shock these two teams-- Czech Republic and Finland-- are being as discounted as they are.

Sure, you have being overshadowed by other powerhouses, but both Czech Republic and Finland could be the upset special, even though they are not full-fledged sleepers like Switzerland, Germany, or Belarus may be considered. You could almost put the Slovaks in there, but I think they're another Games away before you can consider them in this mid-level threat. Hell, Finland won the silver medal and the Czechs won the bronze in 2006 and there's little to no respect for them.

Let's start with the Finns, who had four of the six top tournament player (Antero Niittymaki, Kimmo Timonen, Saku Koivu, and Teemu Selanne) in 2006, while also having five of the top-10 leading scorers (Selanne, Koivu, Ville Peltonen, Olli Jokinen, and Jere Lehtinen). The big knock could be a lot of these players are back and have gotten older and lost that scoring touch they once had; yet they seem more like a full team than most units out there. There's a small younger stride, but the old-guard could be a downfall-- as well as the smaller rink. At the same time, their goaltending is superb on paper. They tandem of Niittymaki, Niklas Backstrom, and Miikka Kiprusoff could be one of the best trios rostered in the games, maybe next to the Canadians. They'll be playing a tight-checking game because they probably won't be as fast, but if they can get top-notch goaltending, they'll win a lot of 1-0, 2-1 games.

Moving onto the Czech, they have a lot of forward who were born in the early to mid 80s, while having the likes of Jaromir Jagr and Patrik Elias as the old guard. While it might not be a youth movement, the players they have; Martin Havlat, Martin Erat, Tomas Plekanec are pretty much in their prime in terms of age. You also have a younger side of Tomas Fleischmann and Milan Michalek who can score in there as well. A grab-bag of players who can actually contribute constantly. On defense, they have a solid older side with Pavel Kubina and Filip Kuba, but the guy to make some noise could be Zbynek Michalek, who is having a solid year defensively in Phoenix. The one question could be consistency in net, with Tomas Vokoun and Ondrej Pavelec as the tandem. They have the ability to hold a team into it, but if they shelled-- it could spell disaster for the Czech team.

In the end, we'll have to see what goes down when it comes to the Olympics, because if a team gets on a hot-streak at the right time, we could have another situation where it's all out of whack by the time we get to the medal rounds. When you look up and down, these two teams are going to be overlooked, even if they have a great mix in their rosters and could play more like a team and other nations. The team dynamic could the be the one intangible that these two teams use in order to get them to the medal rounds once again.
Posted by ScottyWazz at 11:10 AM

Don't the Czechs have Tomas Kaberle too? swoon