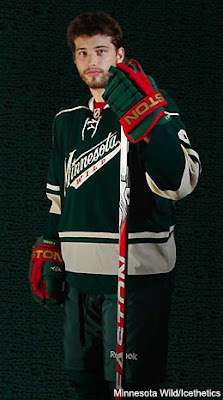 The leak is out for the third jersey for the Minnesota Wild by way of Icethetics. Essentially what the style is looks back to the Western Conference jerseys from the All-Star Game in 2004 when it was in Minnesota. However, it has a cursive script with Minnesota in the large letters and Wild at the bottom, which is the tail of the "a" in Minnesota....which doesn't makes sense because the end of the "a" has to double back in order to work. Also, it has the unneeded piping on the shoulders, which we all know I flipping hate.

As a whole, the style and look is classy. Minnesota is one of the area which is related to hockey and it's tradition. It's something that will keep the vibe there of a home-grown feel that the Wild seems to have with their organization and their fans. However, there's so much they could have done with the third jersey.

Of course, their last third jersey, which I like to think of as "The Christmas Jersey", morphed into their home jersey once the Edge came into play. This new jersey brought about the green feel they had when they came into the league. However, it doesn't have the pizzaz or eyecatching wonderment you often think about when it comes to third jerseys. The wordmark is overused and is a little "meh", especially when it looks just too streamlined when it comes to the color green. It's almost too much green in the scheme (poet and don't even know it) and makes me hate it. Green isn't my favorite color in the first place, but the Wild made it work with the gold and red accents they had in their old green jerseys. This just seems dull, out of place, and not something I will go crazy for.

Of course, this is just a leak and who knows if this is something to throw off the smell of the real jersey and what it could look like on the ice; but right now, I'm not a big fan of it at all.
Posted by ScottyWazz at 11:25 AM

Green is my favorite color... SHOW ME THE MOONEEYYYYY!!!!