Who's The Personality Now?? 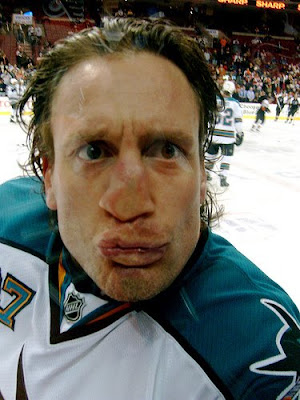 News broke today that Jeremy Roenick will be announcing his retirement on Thursday, ending a great career of over 500 goals and over 1,200 points. Not only that, he knocks another off the NHL '94 list (it's not so much me as it is Roenick, he's good), as well as leaves as the greatest personality the game has to offer. Always up for a quote, Roenick would never mince words and would often talk without his filter on....if a filter exists.

Roenick commanded respect from others and often was the guy to lighten the mood when needed and be clutch when he needed to be. He was a character guy and would battle to the hilt in any situation at all. He adjusted himself from a high-powered scorer to a grinder later in his career, a transition some players may not be too keen on doing and may not succeed when doing it.

He will no doubt get a TV gig somewhere because he knows how to handle himself on TV and won't have the awkward transition most ex-players have in terms of being comfortable on the set. I wouldn't be surprised to see JR's #27 raised to the rafters of United Center for his great Blackhawks' days and maybe his #97 in Phoenix or Hamilton or wherever the end up for his time in the Coyotes organization. He was a special player, a renaissance player, if you will. He could do his talking on and off the ice and made the game enjoyable to watch and follow. There was never a dull moment with him and will never be a dull moment on every broadcast he's on.

The question now is who will be the personality of the league right now that will be like JR's was.

At first, you have to look to Sean Avery as the guy who will be the personality. He goes on without a filter, he has a swagger like no other, and he's not a half-bad player. However, I don't know if he has the respect that JR had or if the NHL would even want to associate with Avery considering the things he has done. You have to say Avery does command the attention, not always in the good case though.

Then, you look to Alex Ovechkin. He has the flare, he has the excitement there to be the heir-apparent, but his English is what's holding him back to be the quote machine that JR has been. If Ovie can get some zingers in there or start to not be as reserved as he is in terms of saying what's going on in the league-- he could be the guy to slide right in there, but it's not to be.

Coming back in, Ray Emery is a guy who could be a personality within himself. In a town like Philly, a guy who has the swagger he does, draws huge attention to himself, plus isn't afraid to speak his mind; he could be the long shot candidate for this whole thing. Albeit, he's a loose cannon on and off the ice, but it's always seems like he's under the microscope regardless of where he is at.

Maybe it's just me, but I don't see anyone sticking out nowadays in terms of straying from the company line of the league. Especially recently, it seems that the players coming in are cookie-cutter in terms of personality. There's no real brash personality coming into the league. They can play great, they do a lot of their talking on the ice; but it's nothing to exciting once you get them off the ice. They do the cliche bits, but no one is really standing out and maybe that's what's needed nowadays for hockey. Sure, Sean Avery is a great guy to be the next big personality, but so long as he keeps it within the boundries of good taste and waiting for the press to come to him and not the other way around.