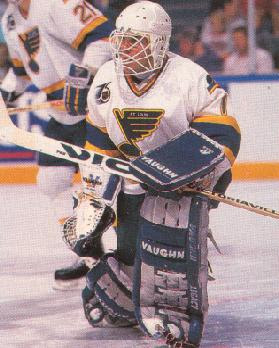 Though this gimmick should be easier than it seems, the fact of the matter is there's times that I get stuck on who to put out there in the open. Luckily, the wonders of immediate social media allowed me to get some input from the Twitter fateful, with a rousing uprising over one Pat Jablonski. Both Leahy of Yahoo and Joe of Gross Misconduct brought up the right-handed catch sensation, who really lived up to his seventh round selection in 1985 from the St. Louis Blues.

While he did lead the OHL in shutouts with three back in 1986-87, Jablonski bounced back and forth between Peoria in the IHL and St. Louis, mostly heading to the Lou when Vincent Riendeau, Greg Millen, and/or Curtis Joseph went down for one reason or another. However, during the 1990-91 season, Jablonski went coo-coo in the IHL, going 22-3-3 for the season with the Rivermen, only to come to St. Louis when CuJo got hurt and was used to back up Riendeau. Even Guy Hebert took Jablonski's heat away, as Hebert took the back-up role to CuJo in '91-'92.

At that point, St. Louis traded Jablonski to the newly formed Tampa Bay Lightning, where he was the named starter for the inaugural season of the Bolts. The first year for the team was rough, though Jablonski got a majority of the starts over J-C Bergeron and Wendell Young. Jablonski and Bergeron shared the lead for wins with eight that season, though the final tally for Jablonski was 8-24-4 with a 3.97 GAA. The next season in Tampa was worse, as Daren Puppa came onto the scene and Jablonski was swept out to pasture, traded to the Toronto Maple Leafs after going 5-6-3 with Tampa. Jablonski spent most of his time in St. John's of the AHL to keep fresh, going 12-3-1 in the AHL, but never played a game with the big club.

During the lockout in 1994, Jablonski bidded his time in the IHL, but only played seven games between the Chicago Wolves and Houston Aeros. Jablonski was claimed off waiver from Toronto by St. Louis, but only played on game before being traded to Montreal. In Montreal, Jablonski was put into the back-up role during the transition period of the Canadiens goaltending corps, as Patrick Roy was traded to Colorado and Jocelyn Thibault was the defacto starter. A season in a half in Montreal saw Jablonski go 9-15-8, before getting shipped to Phoenix, where he only played in two games because of Nikolai Khabibulin's presence in net.

During the 1997-98 campaign, Jablonski was signed by the Carolina Hurricanes, but again was placed into the limbo of the minors, where he stayed in the IHL, mostly with the Cleveland Lumberjacks. After pulling a .500 record with Cleveland and Quebec, coupled with a very subpar performance with the Canes; Jablonski settled up with the Chicago Wolves, going 22-7-7. It would be his last season in North America, as Jablonski set out to Sweden for the next two seasons, before ultimately retiring from pro hockey as a whole.

Jablonski made news late in 2008 as he almost had a tragic ending to his life. Jablonski nearly drowned after being hit by a wave during a vacation with his family near the Gulf of Mexico. While boogie boarding, Jablonski came across an 8-foot wave that he couldn't handle. He fractured two vertebrae and herniated a disc that dug into his spine. Upon impact, Jablonski couldn't feel his limbs, but regained that feeling during transportation to the hospital. Jablonski suffered that injury in September and he has sinced recovered nice enough after a couple months in a neck brace, and he came back to play in net at the Tampa Bay Lightning charity Fan Fest game, though-- I guess fittingly-- he took the lose.

Though he's been through many ups and downs, both professionally and personally-- but he seemed to have gotten through it with a smile on his face and an appreciation for the game, as well as getting the chance to play in the NHL. He seems to like the life of a family man right now, as he has two children with his wife and seems to stay out of the post-career commentator role many others have gotten into, for which he could have been good at or not so much.
Posted by ScottyWazz at 8:45 AM