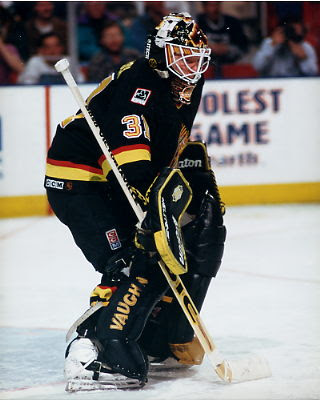 In the same vain of daily Twitter tags and Opie and Anthony, I've decided to do a theme day. Goalies seem to be me the most interesting folks in hockey, whether it's the paint on the mask, the pads, the quirks-- whatever, there have been many that have been; goalies stand out in peoples minds. So, why not have a theme day like "Absurd Goalie Monday"?? And this won't be for goalies that are well known for their feats, but I'm going with goalies who are known, but maybe for how bad they are or just a name you'd never thought you'd hear again. We'll try it out for a while and see how it goes.

First up, a guy who created the FOHS's "Corey Hirsch Effect," as it lived in folklore due to his play in relief of Olaf Kolzig. More on that later though.

Of course, many Canadian hockey fans remember Corey Hirsch from the moment in the 1994 Olympic, getting schooled by Peter Forsberg in the shootout of the gold-medal game, which was immortalized in Sweden in stamp form, even. However, his promise was something that made him a big deal, with the Rangers hoping that he'd be the next in line, should Mike Richter falter. With his promising seasons in the AHL, many thought he'd be able to transition that into a full-time starters job in the NHL. With a 35-4-5 season in '91-'92 with the Binghamton Rangers, it almost seemed like it was a matter of time.

However, it wasn't to be be in the Rangers system. Mike Richter started to show his pure talent, which relegated Hirsch to the third-string, with John Vanbiesbrouck and Glenn Healy in the fold, which only ticked off Hirsch and made him strive to get out of the New York system. That chance came when Hirsch was traded in April of 1995 when the Rangers shipped him to Vancouver for Nathan LaFayette. While in Vancouver, he shared duties with Kirk McLean. Plus, Hirsch did so well at the end of the 1995-96 season and in the playoffs, he took over the starters role in the beginning of the 1996-97 season, but it was ill-fated with him as he lost that gig mid-season.

Hirsch was bounced to the Syracuse Crunch in '97-'98, playing 60 games there and only making one appearance with the Canucks. The next season, Hirsch played the back-up role to Garth Snow and only saw 20 games. After the '98-'99 campaign, Hirsch began to bounce around the IHL with Milwaukee, Utah, and Cincinnati. After starting the 2000-01 campaign with Albany in the AHL, the Capitals came calling on November 1st, and put Hirsch in Portland. Hirsch was called up for one game in a back-up role on March 11th, 2001, when Craig Billington was injured. Which leads to the start of the "Corey Hirsch Effect."

My radio partner Marc "with a 'C'" was in attendance for this game, in which the Capitals were down 5-2 going into the third period. With Olaf Kolzig getting shelled, Hirsch was called for duty in the third. It would mark Hirsch's only appearance with the Caps, but it was an exciting one. Hirsch only faced eight shots, but he kept the Caps in the game. In return, the Caps scored four goals in the third and won the game 6-5. It was one of the bigger comebacks for the Caps, as far as I can remember and I believe that it was due to Corey Hirsch.

After that, Hirsch bounced in the AHL with the Portland Pirates and Philadelphia Phantoms, finding a home with the Dallas Stars, albeit it in a minor league role for the most part with the Utah Grizzlies and seeing two games with the big club, once replacing Ron Tugnutt and then starting the next game. After the 2002-03 season, Hirsch went to Europe, playing in Sweden and Germany before calling it a career.

Currently, Hirsch is the goaltending coach for the Toronto Maple Leafs; which should help out Jonas Gustafsson in terms of knowing the differences between the game in Europe and North America. Also, Hirsch has done work with the Canadian national junior teams in 2007 and 2008, both producing gold-medals for the country.

He's had his ups and downs, but if nothing else; he will be remembered by me for the one game as a Washington Capital that will go down in infamy.......or not.
Posted by ScottyWazz at 9:20 AM

Hirsch was in net when Forsberg scored on him in the Olympics, in the shootout, in the Gold medal game, to kill the dreams of so many Canadians.

My heart wept for Hirsch that day. That's how I'll remember him. He did his best for Canada.