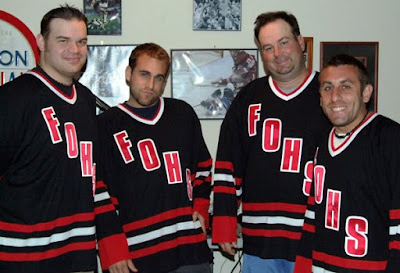 With all due respect to Mr. Quentin Tarantino, I have to use this, with my own twist....for some reason:

"Four guys, sittin' in a garage, in Lanham. All wondering how the eff they got there. What should we do, what shouldn't we do, who's fault it'll be, is it my fault, your fault, his fault, all that bullcrap. Then one of them says, hey. Wait a minute. When we were planning this show, all we did was sit around tellin' effin' jokes!! Get the message?? Boys, I don't mean to holler at ya. When this show's going on-- and I'm sure it'll be a successful one-- we'll get down to the Hawaiian Islands, hell, I'll roll and laugh with all of ya. You'll find me a different character down there. Right now, it's a matter of business."

That's what kind of happened in August 8th, 2001. The day the Face Off Hockey Show was born.

To start off, it was quite the task we had to come up from. Sean-O and Jonny P had a hockey show prior to this gig, but it fell upon trouble times and broke apart. Enter myself and Marc "with a 'C'" to fill those third and fourth mics. We all gelled well together after having time spent with each other prior and know how each other ticked, we learned timing from each other and to this day, it works pretty well.

Of course, to start off a hockey show in August is absolute death and I think the actual show was going to be a variety show with hockey being the main focus once the season started. So, for the first couple of months, it was variety for the longest time until the hockey news started going about, but then it morphed into what you hear today-- hockey news with randomness added in. That first year also saw me go away from the studio setting for the first time, as I went to lovely Aston, Pennsylvania to attend my year at Neumann College. However, once we started to get phone interviews, I made the 90-minute drive back and forth to make the sound quality better. The end of the year was capped off by the start of the NHL Draft trips, many of which have grown with folklore year after year

As we started to catch our groove as a hockey show, we got more and more people on our air and started to establish ourselves. We were able to bring on now "lifer" Lyle Richardson of Spector's Hockey and occasional guest John Buccigross of ESPN, when ESPN was the hot-spot for hockey. We started to do weekly team segments with a bevvy of fan sites, some of which still linger around today, but we don't use it as often. We started having great times together, had plenty of enjoyable outings, and started to gain a following. We had moved to a new studio in Crofton with a nice bigger set-up with a better sound, we expanded from one hour to two hours, and the feel we could make this work on the bigger scale of things.

Then 2004 hit, which brought about some drastic changes for all of us involved. First off, I moved to Calgary.........Alberta, Canada, which is where I stay today. Also, the NHL was heading for labor hell, which ultimately resulted in the NHL Lockout to kill the '04-'05 season. The move was whatever, as we've done stuff via the phone before, but the Lockout really killed us. There were some irons in the fire which were killed by the Lockout, but that's in the past now and what's done is done. However, the Lockout made us wonder what to do-- do we stay or do we take hiatuses to keep fresh?? We soldiered on, found our spots and did what we needed to do in order to make an entertainment show with hockey involved. We made it work perfectly and kept sane somehow.

Once the Lockout was over, we got onto iTunes to establish ourselves as a podcast. We had been doing archived shows for people to go back and listen to, but they couldn't download it like the could in iTunes or Yahoo Podcast or wherever you get your podcasts. We were ahead of the curve in some aspect and were able to get on the wave at the brink of hockey podcasts and were able to get a strong following from people outside of our immediate friends and those who plug from their websites.

To that end, here we are today; still rolling around and bringing about our randomness on a weekly basis. We've gone to another studio in both ends, we've gotten more and more listeners, while not really going back on our original slogan for the show: "A Show About Life, With a 30% Chance of Hockey." We've gotten quite the following with the likes of Greg Wyshynski of Yahoo Sports joining us for debaucherous exposes like our Draft Show, along with good gal pal Princess Curl-- who's able to put up with our craziness and still want to come back for more. It boggles the mind. With the advent of social networking sites like MySpace, Facebook, and Twitter-- our show has been able to get an international following, one I don't think any of us could have thought of getting when we started this ordeal.

It's be a crazy seven years. We've gone from humble beginnings in a garage in Lanham to an entire house. We've dealt with moves, life changes, and just general craziness-- but we're still here. We haven't gotten to the point where we have sold out...because I don't think the opportunity has shown itself. We've stuck to our guns because we've held onto our own credo-- we're doing this for ourselves. If you don't like what we do, we're not going to force you to listen. Either you like it or you don't like it and we're not going to drastically change the format we have (that is known to work, mind you) in order to appease one or two people.

Through the years, there's have been plenty of players involved with FOHS and here's a little love to them:

-JonnyP, Marc "with a 'C'", and Sean-O: You are my brothers-in-arms and I don't think I could be doing a show with a better bunch of guys or have as much fun as I do with anyone else. The fact we can still flow without hesitation either over the phone or when I make a live showing, it just shows we are made for each other. We've gone this far and let's hope we can get ourselves a little further.

-Laura D-F: You were more behind the scenes player, but you have also contributed to some of the best radio we've done, like the Valentine's Day show and the lost tapes of the Draft. You also were a part of Team Media Riser, the greatest team on the Draft Media Risers ever.

-The Guests: There's far too many to list, but thanks to you guys for coming on the show and adding to the 30% we go for in terms of hockey talk. It also allowed us to see if you were down with our randomness....and more often than not-- yes, yes you were.

-The Fans: A lot of yous (to be all Jersey about it) interact with us on a deeper plane than just listener/presenter kind of role and we love you for it. You give us a lot of material, you give us a lot of laughs, and we feel great that you guys "get it" and actually enjoy it to the extent we do.

As we enter our 8th year (9th season if you're nasty), we can only see how far we've gone and how much we haven't given up on this thing. Here's hoping for eight more years and maybe even more success, hopefully in the near future.
Posted by ScottyWazz at 10:00 AM