Looking For a New Suitcase 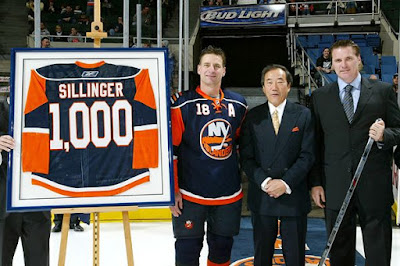 With the retirement of Mike Sillinger, we are now on the look out for the newest player to receive the moniker of Suitcase. Of course, Sillinger played for 12 of the 30 NHL teams out there, as well as being traded nine times, holding the record with Brent Ashton. Now, the reasoning for Sillinger to be treaded was the fact that he was a great asset to the team, not only with leadership, but also for his role in the face-off cirlce and able to chip in a point or two here and there, which made him very desirable at the trade deadline.

Yet, with the departure of Sillinger, there's a void for the frequent flyer in the NHL roster list, via the trade list. You can pull the gimmick of who's been with the most teams, but in the age of free agency, it's a bit trite. In the salary cap age, to figure out who's been traded the most is a bit more interesting to look at. However, through the minimal research I've been doing (it's been documented before, I'm lazy), the fact of the matter is that there's not many big name guys or even role players with the street cred of Sillinger to really say that they are worthy of the suitcase moniker.

Just on a brief look at NHLers, Brandon Bochenski is leading the way, being traded four times throughout his short career (Ottawa to Chicago to Boston to Anaheim to Nashville), but you'd hardly call him someone who is very sought after or possess skills like that of Sillinger. Jim Vandermeer also has been traded four times (Philadelphia to Chicago to Philadelphia to Calgary to Phoenix), but in the same boat as Bochenski; not a Sillinger kind of player. The one guy who could come close to something of worth of a Sillinger could be Olli Jokinen, who also has the four-time ring (Los Angeles to Long Island to Florida to Phoenix to Calgary), which could be excelled to five depending on what Calgary does during the season and what they can do to try to get him re-signed to a new deal or trade him just to get something back.

The one name that pops up in the record amount of times is a man who is still playing, but not in the NHL right now: Anson Carter. Carter, who of course roomed with Jeremy Roenick, has been traded seven times (Colorado to Washington to Boston to Edmonton to New York Rangers to Washington to Los Angeles; then Columbus to Carolina) in his NHL career and has played on eight teams (Washington, Boston, Edmonton, Rangers, Los Angeles, Vancouver, Columbus, Carolina). Carter has the ability to be a decent role player, but as seen in Vancouver-- he can succeed in the right situation. We need a GM to get Carter out of Switzerland, where he plays for HC Lugano, and get him on their roster and trade him. Make the folklore continue on and make Carter the new "Suitcase."

However, the search continues. I don't know if we'll ever get the player the caliber of Mike Sillinger to receive the "Suitcase" moniker or deserve it, for that matter. Sillinger is a class guy and was always willing to do what was needed in order to succeed. If not for his injuries, who knows how many more teams he could have been with. Best of luck in Sillinger in his transition from playing to whatever else is out there. More than likely, he'll get offers to a coaching spot or a leadership role in some capacity.

EDIT: As brought up in the comments by "SL", Jon Sim name will have to be added to the list. Sim has played for eight teams (nine including the 20 minutes spent with Phoenix, never played a game with them though), but he's only been traded twice (Dallas to Nashville; Philadelphia to Florida). The other times, he was claimed on waivers by the teams during the middle of the season. Still an interesting stat for number of teams.
Posted by ScottyWazz at 11:15 AM

finding a true suitcase is never a simple task. My buddy Jon Sim (teammate of Sillinger's) has played for eight teams thus far, and been a member of nine if you count the day and half or so he spent with Phoenix. He could challenge for the title.

Good gravy, good pull. Have to edit. I don't think people count the 20 minutes that Sillinger spent on the Stars, but still rather impressive for Sim.