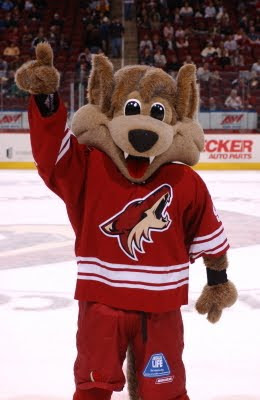 We've had time to digest the whole ordeal that happened with the latest twist in the Phoenix Coyotes' saga, let's look at this bit by little bit.

First, Jerry Reinsdorf pulling his bid for the 'Yotes. You almost got the thought that he wasn't too keen on it in the first place, but he put his name there to be the guy for the NHL. However, on his way out-- Reinsdorf's "people" basically doing what the NHL has been doing and bashing Jim Balsillie for organizing a "publicity effort designed to provide negative and misleading information to interested parties." As well, the Reinsdorf group bashed Jerry Moyes for being an "unwilling seller." For the Moyes' issue, that's kind of true; as Moyes wants his money back that he dumped into this team and Balsillie's bid gives Moyes that money, whereas Reinsdorf bid wouldn't do that at all. In any case, it didn't seem like Reinsdorf was all into this bid at all and the NHL threw his name out there to be the "Great and powerful Oz" while they ran the show behind the curtain. However, when push came to shove, Reinsdorf wasn't able to belly-up to the Coyotes' table and get his piece.

Next, the NHL pulls the curtain back and puts in their own bid in order to make the Phoenix Coyotes into the Montreal Expos. That puts the bidders at the NHL, Jim Balsillie, and at the last minute-- Ice Edge Holdings-- for the Phoenix Coyotes. A team that no one seems to want. The NHL bidding is just showing how much they want to save face in this ordeal. Their biggest name bidder is gone, they are going against their archnemesis, and the other bidder wants to have games in Canada-- both regular season and some playoffs. If I'm the NHL, I cut ties and let Jim Balsillie do what he wants with this team because it's going to do no good at all fighting a fight they have a slim chance of winning.

Sure, they could win in terms of getting the team-- but they risk losing money that revenue brings in to run the fleeting franchise, they also lose face in the sports echelon for having to put their own bid in a team no one wanted to stay in that market. Most importantly, they risk losing a team as a whole-- not just from the US to Canada, but going from 30 to 29, which I don't think anyone wants because it puts players out of jobs-- though the owners wouldn't lose as much money in revenue sharing in that. In any case, if that were to happen when the NHL owned it, they would look really bad, especially in the public relations lexicon over sports leagues.

Finally-- Jim Balsillie speaking, saying that he's giving the process until September 14th to get a deal done or he's out of the running. This is four days after the auction is to take place and one day before the Coyotes first pre-season game. Balsillie wants to deal to be done and to move the team immediate or else he's gone and will lay low until the next troubled team pops up.

Now, I like Jim Balsillie, I think that he's a good owner for the NHL and would shake things up and get interest in the game, much like Mark Cuban in the NBA-- but to Jim Balsillie: SHUT UP!! Don't say anything, don't as much think of putting out a press release or comment until all is said and done. You can do nothing but hurt your cause by pulling this gimmick. It didn't help you back in July, it won't help you now. Especially when you looked like it was a slam dunk, you have to talk. Talking now would only hurt your case and make you look like the bad guy and semi-insane. Stay quiet, let the process happen, and you'll come out looking fine. The less you say, the better you look. Let the NHL attack and attack and attack, because they'll look like the petty ones and Judge RTB (Redfield T. Baum) will not buy what they are selling.

So that's what's up. We're no better off now than we were yesterday and just as confused. In the end, with the NHL and Balsillie bitching, Ice Edge Holding could be the winner in all of this, which could be the best of both world and maybe the lesser of three evils and not as many appeals when this is overwith. We can only hope this is over soon, but we're only just beginning, I'm sure.
Posted by ScottyWazz at 8:50 AM

--
Finally-- Jim Balsillie speaking, saying that he's giving the process until September 14th to get a deal done or he's out of the running. This is four days before the auction is to take place and one day before the Coyotes first pre-season game.
--

Actually, September 14 is four days AFTER the auction is to take place.

Great grab....don't know what the heck I was looking at when I didn't catch that. Ah well, what can ya do?? The edit button clears all.