Looking at the Rookies 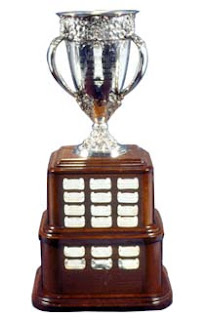 We're at the camping time of the year-- finally the dark days are behind us. A hot topic will be which of the young guns coming into the league will be the one to turn heads and maybe become the franchise player of the future, today. I could put more rambling cliche things in here, but you get the point; so with that-- let's get to some freshmen who could be making waves in the NHL this coming season.

Steve Stamkos, TB: The first overall pick in the '08 Draft, Stamkos has been pimped out the entire summer in the Tampa area. And with good reason, too. After 197 points in 124 OHL games, Stamkos will probably be thrown into the top-six of the Bolts. However, many forecasters have Stamkos between 40 and 65 points this season. There could be that learning curve, but I would expect to see him more in the 70-point area.

Fabian Brunnstrom, DAL: There was plenty of buzz with Brunnstrom from the start of the calendar year, but he landed in Dallas as a final destination. Even with a few years under his belt in the Swedish Elite League, the transition for Brunnstrom could be a longer one than some kids coming out of junior. With the Stars defensive prowess, there's a good chance the point total for Brunnstrom will be lower than most freshmen.

Kyle Turris, PHX: Turris got a small taste last season and netted an assist. Now, with a summer of training under his belt, Turris has a good chance to make his way into the top-six and to many, become a team leader in scoring. With a team like Phoenix, it's a good chance for him to get time on the ice, but somewhat little exposure in the mainstream media-- which will hurt him in the Calder ballot.

Kyle Okposo, NYI: Fast tracked from college to the NHL, Okposo did what he could in his nine games last season, potting two goals and five points; while in the AHL, he put up 19 assists and 28 points in 35 games. With a rebuilding Islanders team, Okposo should be one of the the hot hands for the Isles this season and could create some buzz for the other New York team.

Ted Purcell, LA: Purcell's offensive stride should be able to get him a shot at the top-six slot of the Kings, especially with the departure of Mike Cammalleri. With 83 points in 67 games as an AHL rookie last year, Purcell will probably get plenty of chances to prove himself as a go-to guy for the Kings for this season and beyond.

Nathan Gerbe, BUF: Probably one of the dark horses for the Calder, Gerbe's size will definitely come into question when it comes to if he's ready for an everyday line-up slot. At 5'5, Gerbe will have to do his damnedest to get noticed. Though he led the NCAA in scoring last year in points, Gerbe will have to do even more to get a fair-shot in the pros.

Jakub Voracek, CLB: Voracek is coming off two 60+ assist season in the Q and could be slated to be a set-up man for Rick Nash in the future. However, without many weapons behind Nash and maybe Kristian Huselius, Voracek may have to go about things the hard way in the first few seasons in order to hit the cash cow of being Nash's set-up man.

Now, I'm sure you're probably wondering why guys like Drew Doughty or Zach Bogosian aren't on this list. It's not because they won't make some waves, but most off-- since 1988, only three defensemen have won the Calder Trophy: Brian Leetch, Bryan Berard, and Barret Jackman. With a class like this, odds are that the trend will continue for d-men to be overlooked.

Plus, we have to put into effect the "Sean-O Rookie Theorem" where an out of nowhere rookie will have a hot second-half and steal the show. We'll have to see, but with camps starting up-- we'll be able to weed out the candidate from there.
Posted by ScottyWazz at 10:08 AM