Looking at the GCI 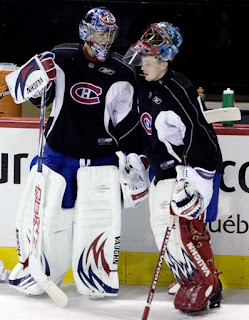 The September 16th issue of The Hockey News arrived at my doorstep today and one of the more interesting pieces, aside from the Major Junior preview, was THN's Goalie Confidence Index or GCI. What THN has does was rank 60 goalies (starter and back-up per team) based on save percentage, GAA, save percentage on the PK, percentage of games in which the goalie was pulled, percentage of games giving up five goals or more, winning percentage, and shutout percentage. They combined both and like golf, lowest score is the big winner.

There's other equations in terms of weighted means and how frequent a goalie starts. Really, it's quite something that they have done here.

Of course, this will spark plenty of debate, but it seems pretty solid all around. The Montreal Canadiens with Carey Price and Jaroslav Halak were first thanks to Price's upside and winning percentage and Halak being the highest ranked goalie because of his spot duty. The Atlanta Thrashers were ranked 30th due to Kari Lehtonen giving up more than five goals in seven of the 48 games he played last year, while Hedburg was one of the worst of the back-ups in the league.

Here's a rundown of who's where:

There's a couple of teams who I thought were a little too high, like Nashville with their unknown and, to a point, unproven goaltenders in net; and Tampa who may have gotten to 20th thanks to Mike Smith's time in Dallas last season. Columbus could be looked at as too high, but Pascal Leclaire's nine shutouts helped them get this high.

Conversely, there some teams I think are too low, like Calgary-- while the Miikka Kiprusoff has been off recently-- they aren't in the lower third of the league. Carolina also got a bad rap, I thought, especially with Cam Ward still coming on his own and not getting a constant back-up help last season.

It must have been some serious number-crunching (read: boredom) in the THN newsroom for this whole thing to be broken down the way it was. I would love to see individual numbers to see how all 60 goalies match-up to another, but that may have to wait for a while.
Posted by ScottyWazz at 5:47 PM

seriously you got this?

I just got the Sept 2nd issue on Monday.

Yeah man-- it's Canada, anything with "hockey" on it gets there faster. It's actually a good read about the Bolts new owners too.

All fear the Philadelphia Coyotes!

Unknown said...
This comment has been removed by a blog administrator.
2:01 AM