Johnson's Loss Could Be Burke's Gain 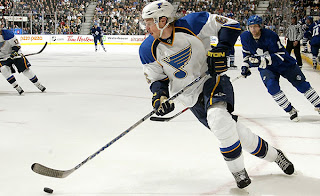 You never like to cheer when a guy get injured, especially when it's a top prospect like Erik Johnson; but when the word came out of St. Louis that the young defenseman was out for the season-- you can bet that Brian Burke had a small smirk on his face.

It's not because he wanted to see Johnson injured, but mostly because it looks like he has a new spot to put the ugly duckling of sorts (get it??), Mathieu Schneider. Though, it's not a solid sell, the fact that the Blues could use like Schneider ups the ante that the "Gateway to the West" is the next destination for Schneider.

However, let's look at what this means for Johnson. You couldn't have been in a more freak accident, jamming your foot between the brake and gas of the golf cart and twisting it while getting out?? How do you expect that to happen?? Maybe he just wanted to get to his next shot....but oof-ta. Now, I'm not saying that Johnson could be cursed, but it's not something the Blues like to see because the flashbacks of another young defenseman with injury woes, Barret Jackman, is very fresh into their minds....but they don't want to say anything because he's right over there.

And especially with a torn ACL and MCL, it could mean that this will be the start of knee problems for Johnson, considering he can play a rough game when needed. You never know what the future holds, but it's a tough pill to swallow and a bad omen when you do what you did in a incident like that.
Posted by ScottyWazz at 8:05 PM