The Summer of GMGM 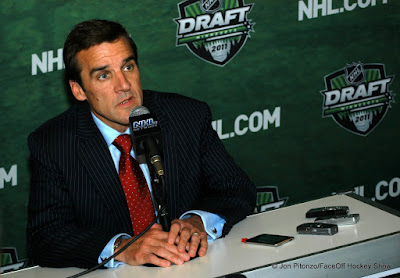 Say what you will about the on-ice results, but the moves the Washington Capitals have made this off-season have been nothing short of spectacular. Most of that can be credited to the slyness of one General Manager George McPhee; or GMGM, as the kids call him.

First off, it started with the firing of Arturs Irbe and bringing back Dave Prior as the goaltending coach and Olaf Kolzig as the assistant goaltender coach, probably laying the ground work for Kolzig to take the reins later on down the line. That was also something that set-up Semyon Varlamov to get dealt, since he had fallen behind Michal Neuvirth and even Braden Holtby; but there was no deal for Varlamov in June.

Fast-forward to the Draft, where there wasn't anyone the Caps wanted, so GMGM made the move to give up their 26th pick in the first round to the Chicago Blackhawks for Troy Brouwer. That's a move that kind of solidified the end of Matt Bradley's tenure in DC, but Brouwer is a guy who has playoff experience at a young age, that it could help the team-- if they can get him signed.

Move a couple days ahead, and some people say this was a little bit of a slip-up, giving Brooks Laich a long-term deal for big dollars to keep the fan-favorite in Capitals red. In the end, with the cap going up and salaries probably doing the same-- it could end up being a steal when all is said and done. However, at the moment-- it doesn't play out to some fans liking.

Then July happened....and GMGM got cold-blooded.

It started off for GMGM by signing old Capital Jeff Halpern to a one year deal, bringing in some leadership that some thought was lacking in the dressing room. Then, he signed Joel Ward, a gritty forward, from Nashville for four-years, then got a veteran defenseman in Roman Hamrlik for two years, probably to help mold the younger defensemen on the squad.

But that was not the biggest move of July 1st for GMGM.

I don't know if it was knowing there was desperation or if it was his cutthroat ways-- but McPhee got rid of Varlamov and sent him to the Colorado Avalanche...for a 1st Round Pick in 2012 and 2nd Round Pick in either 2012 or 2013; the Caps choice. The 2012 Draft is supposed to be much, much, MUCH deeper than this year and with the Avalanche possibly being as bad as they were last year-- could be a HUGE pick-up for the Caps.

While many thought that GMGM could be mad to go with two rookies in the NHL.....July 2nd, McPhee addressed that-- by signing the highly touted free agent goaltender Tomas Vokoun to a one year deal....worth $1.5M dollar, which is a paycut of over $4M from last season. I don't know what voodoo McPhee did to make this deal happen; but he could have pulled off the biggest shock of the free agency period. Not only does Vokoun provide a veteran presence and can stop a lot of shots; but he'll be able to mentor his fellow Czech Republic native, Neuvirth-- which could prove very invaluable down the line.

However, with only $500k left of their cap, you can bet that McPhee will probably deal someone to free up some space and sign the likes of Brouwer and bring up some of the guys from Hershey to try their hand-- but at the same time; he's done a lot of amazing things in order to make his team better and get all the parts he thought was missing and got them ousted early for the past two playoffs.

The pressure is on the team and coaches now, though. GMGM has done his part and you really can't fault him too much for the results that happen on the ice. Yet, with the group he's compiled, it's almost to the point where not much could go wrong unless the chemistry just goes awry.

But, if he does get the brunt of any failure, he can definitely fall back on his new stand-up comedy career, as you see here; working out material during a press conference. 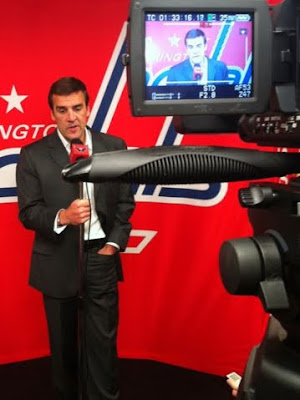 Posted by ScottyWazz at 7:50 AM