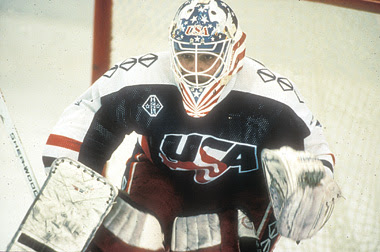 To celebrate the Fourth of July in the United States, it's time to profile a guy who many people had high-hopes for coming off a solid Olympic performance in 1992. Yet, at the same time-- as it always does with these-- one thing happens to ruin the greatness that could have happened. This week, the profile of Ray LeBlanc.

Though he grew up in Massachusetts, LeBlanc played his Junior "B" hockey in Ontario, Canada; starting with the Markham Waxers in 1982-83, playing in only six games with a 2-2-1 record, before going to the Dixie Beehives in the same season, finishing with a 16-8-3 record there. The 1983-84 season saw LeBlanc head to the OHL to play for the Kitchener Rangers, going 39-7-1 in 54 games, then 3-1 in the Memorial Cup (which Kitchener hosted), with his only loss coming in the final game.

After that, LeBlanc moved onto the Atlantic Coast League, playing for the Pinebridge Bucks for 40 games in the 1984-85 season, going 18-21-0 while gathering Second Team All-Star honors. The 1985-86 season had LeBlanc played with the Carolina Thunderbirds for 42 games, compiling an astonishing 33-9-0 record, including three shutouts. The Thunderbirds would go on to win the Bob Paine Trophy as ACHL champions. LeBlanc got First Team All-Star honors that year, as well.

LeBlanc would move onto the IHL in the 1986-87 season with the Flint Spirit, playing in 64 games with a 33-23-1 record before going 1-3 in four playoff games. That season, LeBlanc got Second Team All-Star honors and won the Ken McKenzie Trophy for US-born Rookie of the Year. LeBlanc would be back with Flint in the 1987-88 season, where he would play 62 games with a 27-19-8 record, while going 10-6 in the playoff; getting the Spirit to the Turner Cup Finals, but losing out on it. LeBlanc started the 1988-89 season with the Spirit, going 5-9-0 in 15 games before moving along to the Saginaw Hawks, finishing there with a 19-7-2 record in 29 games. LeBlanc also made an AHL appearance with the New Haven Nighthawks in a no-decision.

With him sporting his wear, the Chicago Blackhawks thought they would give LeBlanc a chance and signed him to a contract in the summer of 1989. The 1989-90 season has LeBlanc back in the IHL, but with the Indianapolis Ice for 23 games, going 15-6-2 before being shuffled off to the Fort Wayne Komets for the rest of the season, going 3-3-3 in 15 appearances. The 1990-91 season had LeBlanc do the reverse, starting with Fort Wayne for 21 games (10-8-0), then moving to Indianapolis for three games (2-0-0).

The 1991-92 season saw LeBlanc start with Indianapolis, playing 25 games with a 14-9-2 reocrd before taking a leave from the professional route in order to play for the USA in the 1992 Olympics. In tuning up with the US National Team, LeBlanc went 5-10-1 in the exhibition games. While it wasn't looking bright, LeBlanc turned up his game in the actual Olympics, going 5-2-1 in his eight games, including two shutouts; as the Americans finished 4th in the Games.

When LeBlanc returned, he was placed into the line-up for the Chicago Blackhawks later in the season, winning against the San Jose Sharks. Yet, while it may have seemed like a nice gesture; it seemed that the Hawks had ulterior motives. With an Expansion Draft looming, each team had to make a goalie available from their roster if they had played one game. Not wanting to expose Ed Belfour, Jimmy Waite, or Dominik Hasek; this game was the game for LeBlanc to be the odd-man out. However, LeBlanc was not chosen for that Expansion Draft.

Not much has happened from LeBlanc since his playing days, but he did become a Born-Again Christian in 2008, joining the Calvary Church.

While he did seem to have promise, he only saw one game of NHL time and it was to expose a loophole in the NHL's plans. While it is more than most people get, LeBlanc at least gets the recognition of being another USA goalie who flew under the radar during the Olympics, but couldn't translate that into a solid NHL career.
Posted by ScottyWazz at 8:00 AM