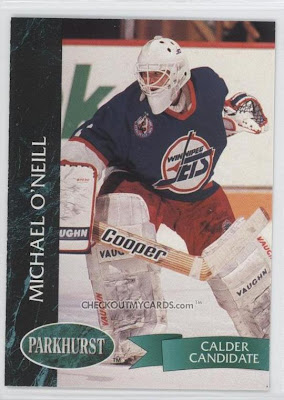 With the Winnipeg Jets showing their new identity, what better chance to review the career of another Jet goalie, right?? However, while most of his appearances were in relief, he did have a decent amount of time in Winnipeg. Yet, the one thing he does share with the new Winnipeg Jets-- no wins in the NHL yet. This week, the profile of Mike O'Neill.

After spending a year at Lower Canada College, O'Neill moved to Yale University for the 1985-86 season. O'Neill was slowly worked in at Yale, going 3-1-0 in six games during that first season; but would get increased time in the 1986-87 season, playing in 16 games with a 9-6-1 record-- taking home ECAC First-Team All-Star honors. As he took over the starting role in the 1987-88 season, O'Neill's number slipped, going only 6-17-0 in 24 games-- but it was enough for the Winnipeg Jets to pick O'Neill in the 1988 Supplemental Draft. With a team behind him, O'Neill bounced back for his season season in the 1988-89 campaign, going 10-14-1 in 25 games, which was enough for O'Neill to get yet another ECAC First-Team All-Star honors and NCAA East First All-American Team.....though it's odd since he's Canadian.

While his college career was over, O'Neill didn't jump to the North American professional ranks right after that. Instead, he went overseas to play in Finland with Tappara Tampere in the 1989-90 season and got plenty of playing time, going 23-13-5 in 41 games, then going 3-4 in the playoffs.

O'Neill returned to North America for the 1990-91 season, starting off with the IHL's Fort Wayne Komets and playing in eight games (5-2-1) before making the move to the AHL's Moncton Hawks for 30 games and going 13-7-6 in the regular season, while going 3-4 in eight playoff games. The 1991-92 season had O'Neill traveling a lot, starting off in Fort Wayne for 33 games and a 22-6-3 record, then he would spend a game in Winnipeg, coming on in relief for a game. The end of the season had O'Neill setting in Moncton, posting a 14-16-2 record in the regular season, then went 4-7 in 11 playoff games. The 1992-93 season had O'Neill start off in Moncton, playing for 30 games with a 13-10-4 record before getting the call-up to Winnipeg-- playing in two games and going 0-0-1 before having to miss the rest of the season due to shoulder surgery in February. When O'Neill came back in the 1993-94 season, he went through another whirlwind traveling schedule, starting off in Fort Wayne and finishing with a 4-4-3 record in 11 games before he moved onto Moncton, going 8-4-0 in 12 appearances. Finally, O'Neill got the call to Winnipeg to back-up former AGMs Bob Essensa and Tim Cheveldae-- appearing in 17 games and posting up a dismal 0-9-1 record.

O'Neill signed as a free agent with the Anaheim Mighty Ducks and was sent to the AHL's Baltimore Bandits for the 1995-96 season. O'Neill had plenty of playing time in Baltimore, playing 74 games and finishing with a 31-31-7 record, then going 6-6 in 12 playoff games. O'Neill got a small shot with Anaheim, but came in for a game as a replacement for Mikhail Shtalenkov. O'Neill stayed in the Anaheim organization, but was shifted to the IHL and the Long Beach Ice Dogs, where he'd play 45 games and finish with a 26-12-6 record.

For the 1997-98 season, O'Neill signed with the Washington Capitals, but spent that season with the Portland Pirates-- playing in 47 games and compiling with a 16-18-10 record, then finishing with a 2-3 record in six playoff contests.

With no jobs in the 1998-99 season in North America, O'Neill had to sign in Austria with EC Villacher SV, who played in the Swiss league. He would play in 42 games and finished with a 2.46 GAA on the season.

O'Neill would return to North America for the 1999-2000 season, signing a deal with the Los Angeles Kings, but would be placed in the IHL, first with the Michigan K-Wings for four games (1-1-0), then was moved to the Long Beach Ice Dogs, where he would go 7-12-5 in 25 games, and suffer a loss in his only playoff game.

No opportunities in North America, O'Neill once again went overseas, this time with the Sheffield Steelers of the British Hockey League where he played in 30 games, finishing with a 2.39 GAA and aided the Steelers winning the B&H Cup (held at the beginning of the season), the Challenge Cup (held during the season), the League Championship, and Playoff Championship-- the Grand Slam of British Hockey championships.

O'Neill would retire after that season and his whereabouts are unknown after his retirement.

While it seemed he was able to get things going in the IHL, O'Neill's struggled in the AHL, with some fairly bad teams, and didn't get a chance in the NHL past a back-up. Though, he was able to see the world in North America and then overseas-- but just couldn't seem to get as successful in the other leagues as he did in the IHL and overseas.
Posted by ScottyWazz at 8:00 AM

As a kid I didn't like him. I had the childish notion that he was going to beat out Essensa for the starters spot. Little did I know a short while later Bob is gone and Chevy is on his way to the Jets