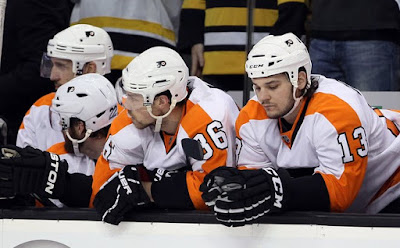 History did not repeat itself, as the Philadelphia Flyers couldn't come back from a 0-3 second round deficit against the Boston Bruins; getting swept this time around. There's a lot of questions with the Flyers, but it starts from the back out.

Since 1999, the Flyers really haven't had a solid goalie. Sure, they've had a lot of stop-gaps, but the patch-work continues. While Sergei Bobrovsky did a solid job in the regular season-- the playoffs were a much different story as they leaned more on Brian Boucher and Michael Leighton for a small window. Is this something that's going to continue?? Well, both Bobrovsky and Leighton are under contract, so I assume they'll lean on Bobrovsky more and maybe he'll learn, while Leighton just hangs around, hoping for a chance to pop in there.

To the positives, the Flyers were able to get a lot of former first-round pick Claude Giroux, who lead the team in points this season, whilst his landlord, Daniel Briere proved to be a solid goal-scorer in the first round, but didn't seem to appear much in the second round. Mike Richards and Jeff Carter also had solid seasons, though the scoring all sound was spread out for the Flyers-- having seven 20-goal scorers with Ville Leino only one goal away from joining that club. There's not much to worry about when it comes to the offense in the coming years-- just have to hope that it's as spread out as it was this year.

On the blue line, Matt Carle continues to excel, leading the Flyers' D in points and tied for the lead in plus/minus with Andrej Meszaros. Meszaros himself had a pretty solid year, bouncing back from some subpar seasons in Tampa Bay. Chris Pronger missed a good chunk of the season due to various injuries, including some of the playoffs where he dealt with a lingering hand injury. All in all, the defense probably had to play better, given the fragility of the goaltending at any given moment.

It definitely wasn't the rebound from the Stanley Cup finals appearance last year-- but the Flyers did what they could. Peter Laviolette may be on a tight leash next season, but with a healthy squad-- who knows what this team could have done. Yet, until something is done about the goaltending, odds are there won't be many other question as prominent as that one.
Posted by ScottyWazz at 9:50 PM