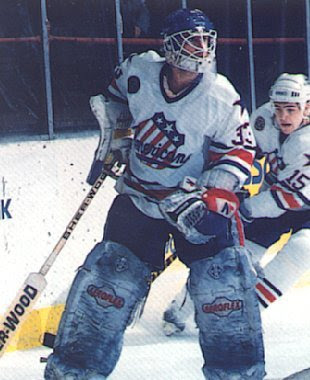 While I didn't plan it like this, it just happens to be the 91st goalie in the AGM series, which is the year that this year's AGM's new gig started. It's a guy who didn't get much of a taste of the NHL, but still had a pretty solid career in the NCAAs and minor leagues. He may have taken the scouting report of being technically sound a bit too seriously. This is the profile of David Littman.

While Littman started with the Oyster Bay Gulls in the New York Junior League, Littman really burst onto the scene with the Boston College Golden Eagles in the NCAA for the 1985-86 season, where he was a scholarship goalie-- playing in seven games in the first year and going 4-0-1. Littman would split time in 1986-87 with Shaun Real, playing in 21 games sporting a 15-5-0 record, as well as helping BC win the Hockey East Championship that season. That season would get Littman drafted by the Buffalo Sabres in the 1987 Draft in the 11th Round. The 1987-88 season would be a little rough for Littman and the Golden Eagles, going 11-16-2 in 30 games, but was able to get a hold of Hockey East Second All-Star Team honors. However, Littman would bounce back with a 19-9-4 record in his 32 games, grabbing Hockey East First All-Star Team honors and NCAA East Second Team All-American honors.

The 1989-90 season would give Littman his first taste of pro hockey, splitting time between the AHL's Rochester Americans (5-6-1) and IHL's Phoenix Roadrunners (8-7-2). However, Littman would settle into the AHL role for the 1990-91 season, playing in 56 games with Rochester and going 33-13-5, then going 4-2 in eight playoff games, as the Americans lost in the Calder Cup finals. Littman would get his first NHL game in late January 1991 with the Sabres; replacing former AGM Darcy Wakaluk for half the game, both of whom were Buffalo's AHL goalies. Littman and Wakaluk won the Hap Holmes Award in the AHL for fewest goals-against, as well as Littman getting AHL First Team All-Star honors. The 1991-92 season had Littman back in the Rochester cage, playing in 60 games with a 28-20-9 record, going 8-7 in the playoffs; though losing in the semi-finals. Littman got his second Hap Holmes Award and AHL Second Team All-Star honors. Also, Littman got one full game with the Sabres that year, a losing effort against the Islanders.

During the summer of 1992, Littman decided to sign on with the Tampa Bay Lightning for the 1992-93 season, but he would spend most of his time with the IHL's Atlanta Knights, going 23-12-4 record in 44 games, 1-2 in three playoff games, then losing his only game with the Bolts that season against the Devils when replacing another former AGM, Pat Jablonski.

While Littman signed with the Boston Bruins for the 1993-94 season, he was again relegated to the AHL ranks, splitting between the Providence Bruins for 25 games (10-11-3), then loaned out to the Fredericton Canadiens for 16 games (8-7-0). That off-season, he played in one game for the World Championships for the USA, a loss, as they would finish fourth.

Littman didn't play most of the 1994-95 season for some reason (can't find the reasoning), but he would land in the ECHL with the Richmond Renegades for eight games in the season, going 4-2-0, then busting out big and going 12-4 in 17 playoff games, leading the Renegades to a Kelly Cup championship. The summer of 1995 had Littman go to the RHI, playing for the Los Angeles Blades for three games, going 1-1-1.

However, don't feel too bad for Littman-- sure he was a bit off on his NHL dream, but he's living a dream other people would love to have-- Producer for EA Sports' NHL series of games. Rather than not doing the story of him moving from hockey to video games justice-- I'll let his post about the transition go to work.

While he didn't get a primo job as an NHL goalie, he's got a primo job doing work with the NHL and creating something that most NHL fans enjoy. He was able to go through the ranks of minor leagues to try to reach the pinnacle and able to climb through the entry level ranks to be a solid figure head that provides a fancy product to the non-playing fan to actually allow them the chance to experience the game without going through the training and all of that stuff.
Posted by ScottyWazz at 8:00 AM