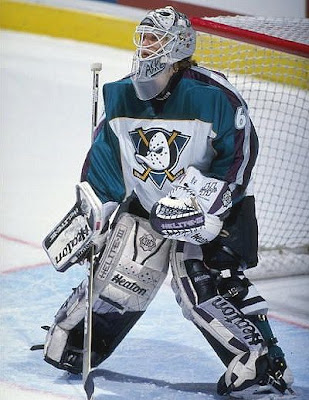 With a small trend of hockey players going in the music direction, this week's AGM follows that kind of ideal. While he didn't have the best college career, has small sip of tea in the NHL, his minor league durability made him endearing to many people. Now, without hockey-- he's on the music scene. This week, the profile of Tom Askey.

Askey moved along to the pro ranks in the 1996-97 season, playing with the Baltimore Bandits of the AHL and getting in 40 games and finishing with a 17-18-2 record. Also, Askey was called by USA Hockey to play in the World Championships, winning his only game he played in.

The Bandits would move to Cincinnati and become the Cincinnati Mighty Ducks, where Askey would spend most of the 1997-98 season, going 10-16-4 in 32 games; but then being called up to Anaheim late in the season-- appearing in seven games with an 0-1-2 record. For the 1998-99 season, Askey was back in Cincinnati, where he would play 53 games and put up a 21-22-3 record, then an 0-3 record in the playoffs. Askey also went to Anaheim for one playoff games in the 1998 playoffs; a loss.

With no gigs in North America, Askey went on a European vacation in 2005-06 season, playing first with HIFK Helsinki and going 9-5-5 in 21 games, then getting moved to Jokerit Helsinki; going 8-6-2 in 16 games. Askey also dabbled in the Swiss league that season; playing for HC Fribourg-Gotteron for six games with a 4-2 record, but then going 0-4 in the playoffs.

Askey would return to North America to play for the United Hockey League's Kalamazoo Wings for 2006-07 campaign, where he would get into 45 games, finishing with a 27-15-2 record, but having a 0-1 record in three playoff games.

One more shot for Askey, as he went over to Italy, first, playing with HC Alleghe for 11 games before moving all the way over to England to play for the Nottingham Panthers, where he would play 31 games; helping them win the Challenge Cup as champions of the Elite League.

After his playing career was done, Askey moved back to Kalamazoo and is actually working on some original music. While he doesn't have a record out yet, he does have some of his work on his MySpace page.

It was a bit of a travel for Askey and while the success didn't really outweigh the unsuccessful side of things, he seemed to still keep strumming along and rolling with the punches. And while he has another career with no guarantee of staying power, he's in it for the love of the art-form rather than the paycheck.
Posted by ScottyWazz at 6:15 AM