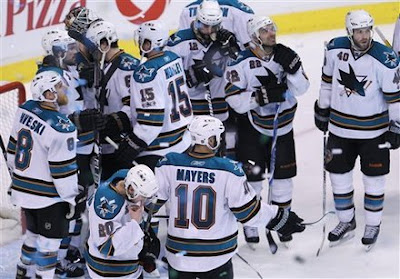 While they did win one more game than they did in last season's playoffs-- the Sharks really have some interesting questions to ask themselves, especially when the production of their top stars was so far off of last year's pace.

We'll start there, as the big-three of Patrick Marleau (-10 in points from last year), Dany Heatley (-18), and Joe Thornton (-19) were very off kilter. Luckily, the role players like Joe Pavelski and Ryane Clowe were able to help counterbalance the lack of production that the big-three didn't put up. Rookie Logan Couture was also a pleasant surprise for the Sharks this season; potting 32 goals and 56 points; allowing the Sharks to see that they have a bright future. Another concern for the Sharks is that Heatley was virtually invisible during the playoffs, going goalless in the last eight games, only collecting three assists in those games-- which could create issues for the remaining three years of his contract, which holds a no-movement clause.

Defensively, Dan Boyle had a slight hiccup, but he was able to actually keep the offensive side of things going for the Sharks, while Jason Demers definitely cemented his regular spot for the line-up with his play and leading the team in plus/minus rating. When Ian White came over from Carolina, he provided a solid help, but it's doubtful he'll be back considering how well that Justin Braun played in his 28 games coming up from Worcester. Douglas Murray was again solid for the Sharks (for the most part), while Marc-Edouard Vlasic played stellar in his stay-at-home role he plays.

The goaltending of Antti Niemi was shaky at the start, only putting up only five wins in 12 games in the first two months, but while Antero Niittymaki couldn't overtake the starting gig that was handed to him; Niemi took hold. Niemi showed that he could be a starter in this league and his Stanley Cup victory was no fluke at all. With Niemi locked up long-term, it's his team to guide. Niittymaki only has one more year left, but he probably won't see much time behind Niemi.

I don't know if the Sharks could every wipe off the "choker" label, despite being in the Western Finals for two years straight. The fact is that this is a team that always comes short on expectations, which could be due to the high expectations they have set on them. Whichever way you dice it, the signs of greatness for this team is there-- it's a matter of following through on the actual signs.
Posted by ScottyWazz at 1:30 PM