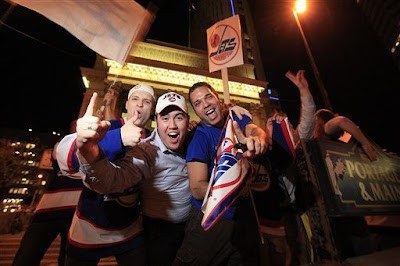 The Atlanta Thrashers will be moving to Winnipeg, pending approval from the NHL Board of Governors; something that may not be too hard a sell when it comes to potential revenue. Granted, Winnipeg does have to deal with their Drive to 13,000 season ticket, but still-- with price ranges being generous-- don't see it being that hard.

And while you'll get details from the most uninspiring press conference ever-- I will only lend some words to both sides of the coin.

First, to the Thrashers fans-- I'm sorry. I'm sorry your ownership let you down, I'm sorry your support wasn't enough, and I'm sure there was no local interests serious enough to keep the team in town. It's a craptastic situation and not one many wish on their worst enemy. The disjointed ownership didn't help and with no clear plan in place for seemingly making the team better....it was almost a matter of time, but probably not this quick. There is probably nothing that will bring you solace at this point, which is why I won't try. I can only send out my condolences to the fans and team members off the ice who won't make the move.

Now, to the Winnipeg fans-- sure, enjoy it, but it's actually time to deal with the gauntlet ahead of you. While you may be keen to the team coming back now, you have to make sure you're actually there for their down times as well as the high times. If the support isn't there when the team is at their lowest-- you'll be put in the same spot you were 15 years agos. And to be honest-- there won't be a third try if that happens. There's a lot of knocks against your city and the cold winters and other intangibles-- but if you show up and show you're support like no other team out there; those will be erased or dealt with accordingly. Support your team through good or bad and while this is a great time to celebrate-- it's also time to get down to work and show you want this team and want it for the long-haul.

And with that-- we now wait. Not only for June 21st and the Board of Governors approval of this move-- but what's next. The team has to come up with a name (yet to be determined, apparently), logo, jersey, and a front-office as they have about three weeks until the Draft. Not only are the fans under pressure, but the owners-- who don't have much time to deal with everything coming at them. Yet, for some reason-- I think they'll do whatever it takes and sacrifice whatever is needed in order to make this once far-off dream and present day reality.
Posted by ScottyWazz at 11:08 AM

It’s good to hear Winnipeg will have an NHL team again, pending approval from the league’s board of governors. The city and its fans have been strong supporters of minor league hockey and the Manitoba Moose ever since the Jets left in 1996. I think fans will quickly embrace the team, and it will have greater success north of the border.