College Signing Craziness is Just That 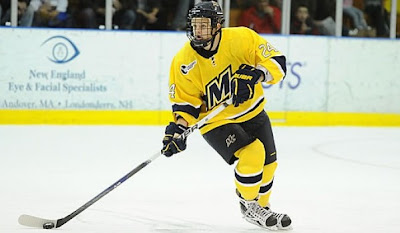 As we are down to the Frozen Four, most of the college players who aren't a part of those four teams and aren't drafted are being courted by NHL teams. We've seen these kind of sweepstakes and hype happen before, but are people making too much out of some of these players getting a look-see. Is this just a footnote and stop-gap exciting thing between the trade deadline and playoffs??

While people are raving over Stephane Da Costa of Merrimack College, at what point do you look at the past signees and realize that sometimes the hype doesn't pay dividends in the first few years....or ever. In the past, we've seen the sweepstakes for Tyler Bozak and Bobby Butler, and while they're slowly shaping into form-- do they warrant the hype, much like the hype some European free agents get-- but they never really pan out like many would think.

Granted, this is something that you could go with junior players and stuff-- but they often get drafted and then never pan out or signed and they kind of fade into oblivion. Yet, it seems that when it comes to this-- if the playoff excitement isn't there-- this is the only thing for the people to get up about. Which, if this is your thing, god love ya-- but I don't see where all the hype is coming from. I just don't get hype unless they prove it without hype...or something. But this whole idea is foreign and weird to me.

To be honest, I can't think of the last time an undrafted college player has made a big impact in the NHL. Maybe you could say that Matt Gilroy for the Rangers was the last big name to come in and contribute to his team immediately, while Tyler Bozak came in with the Leafs for a few games last year and did well, but was bussed between the Marlies and Leafs, while this year he hasn't been the best, as his -29 shows-- but it happens. Mark Letestu is another guy who got signed after his freshman year, but plied his trade in the minors before really getting his shot this year. It just seems the hype that comes from all of this isn't worth getting upset if you lose out on a guy-- because recent history hasn't shined kindly on some of these guys coming off a solid couple of college seasons.

While this is something that is a nice little distraction from the playoff race in the NHL, it seems that the attention it's given is a little much. Granted, I'm not one who has ever really bought into this being a route to be a cure-all or even stop-gap for a team's problems. It seems like if the player who signs even makes it into the NHL, regardless of how good they are in the college ranks-- it'll take a lot of time for them to make a full-time impact in the show. There are a few exceptions to the rule, but not many to warrant some of the craziness being thrown around.
Posted by ScottyWazz at 11:20 AM