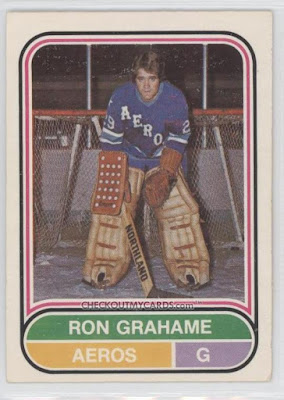 It's tournament time in NCAA hockey and what better way to talk about it than with a man who not only played college and held his own pretty well, but also went back when his career is done. While he did have a solid WHA career, his NHL career wasn't as tenured as he wanted. However, NHL success seemed to run in the family as his family has two Cup rings to their name. This week, a look at Ron Grahame.

Starting in Junior A with the Victoria Cougars, Grahame decided against the major junior route, deciding to go to the University of Denver starting in the 1969-70 season. Grahame would play in 30 games that season, going 19-10-1 for those games. The 1970-71 season was one where Grahame would only see 17 games of playing time, finishing with a 9-7-1 record. Playing time would increase for Ron in the 1971-72 season, where he would play in 37 games, finishing with a 26-11-0 record; helping Denver to win the WCHA Playoff title. Grahame's performance allowed him to be drafted by the WHA's New York Raiders. However, Grahame would come back for his senior season in 1972-73, in which he would go 27-7-1 in 35 games, leading the Pioneers to another WCHA championship and getting them within one game of the NCAA title, but lost in the final to Wisconsin. Grahame's season was so great, he was named WCHA First-Team All-Star, NCAA West First Team All-Star, an WCHA Player of the Year.

That summer, Grahame's rights were traded to the Houston Aeros from the Raiders. Grahame would start out his pro career with the Macon Whoopee of the Southern Hockey League, playing 46 games and going 18-24-2 before getting a call-up to Houston for four games-- going 3-0-1 in those games. The 1974-75 season was a banner year for Grahame. Not only did he go 33-10-0 with four shutouts in 43 games, but he went a remarkable 12-1 in the playoffs-- helping the Aeros to win the AVCO Cup. Grahame was named WHA Playoff MVP, as well as taking WHA First Team All-Star honors along with the Bert Hatskin Trophy for Best Goaltender. Grahame saw his playing time increase in the 1975-76 season, playing 53 games and still putting up a decent 39-17-0 record for the Aeros, but a 6-8 playoff record was all he could muster. In 1976-77, Grahame would split time with Wayne Rutledge and only play 39 games, finishing with a 27-10-2 record, then putting up a 4-5 playoff record in his nine games in the cage.

For the 1977-78 season, Grahame made the jump to the NHL, signing with the Boston Bruins. Grahame would play in 40 games, topping out with a record of 26-6-7, while appearing in four playoff games-- going 2-1.

In December of 1980, Grahame's rights were sold to the Quebec Nordiques for cash. Grahame only played eight games with Quebec, going 1-5-1, before he was sent to the AHL's Binghamton Whalers, where he would play 22 games and sport a 12-6-2 record before he would ultimately retire.

Currently, Grahame went back to his college roots, returning to the University of Denver in 1993 and now serves as the Assistant Vice Chancellor and Senior Associate Athletic Director. In that gig, Grahame oversees all the players and coaches to make sure they uphold the school's mission statement. Grahame has also served as a chairperson for the NCAA Hockey Tournament Committee, as well as being on server Local Organizing Committees for Hockey and Tournament Director for Denver volleyball, lacrosse, and hockey. He was inducted into the University of Denver Athletic Department Hall of Fame and named to the WCHA 50th Anniversary Team. In fact, Grahame and his son Jason were the first father/son tandem to play at Denver; while his other son John and his wife Charlotte were the first mother/son tandem to have their names on the Stanley Cup-- John as a member of the 2004 Tampa Bay Lightning team and Charlotte was on the Executive Management team for the 2001 Colorado Avalanche team.

An excellent college career yielded to a solid WHA career, but a so-so NHL career. Even with all of this, his choice of going to college rather than major junior turned out to be a solid one when it came to later on in life, outside of the rink. He made a dent during his college career-- but that recognition also helped him have the tenure he's had at the University of Denver.
Posted by ScottyWazz at 8:15 AM