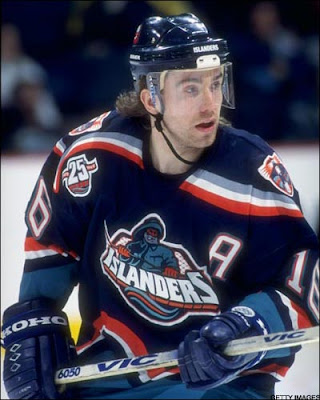 As many of you know, I'm a big fan of the aesthetics of hockey. If you didn't, you do now. In any case, I peruse sites like the CCSLC, Icethetics, and NHL Uniforms. Recently, a topic on the CCSLC came up about what jerseys the users wanted to see come back and in a majority of the hockey comebacks, it seems that the 1990s style of jerseys were selected. It wasn't too far back that the 1970s crazed was going wild-- which it still is, but it seems that many have been longing for the uniforms of the 1990s as of late.

And while we're two decades removed, at what point do retros become retros?? Is there a timeline for such a thing or is it just arbitrarily decided for when one person becomes nostalgic and then becomes a domino effect on such a thing??

Since it's probably the latter, at what point does it all kick in for something to go back to the way it was?? There's very few times where a team does the wrong thing and them reverts back to what they had before, like the Penguins when bringing back the skating penguin and with the Anaheim Ducks putting the old Mighty Ducks logo on their new third jersey's shoulders-- but most of the time, the changes have been for the better. Especially when you consider the tackiness of the jerseys from the '90s, you have to wonder why anyone would want them back.....though, you could say the same about the 1970s movement we've seen.

Yet, at the same time; could it be the tackiness that's actually makes us want it to come back in full effect. Don't know at what people some people got "too cool for the room" when it came to those designs, but it seems everyone is so very happy genuflecting on the good ol' days of jerseys past. Even though there are some that aren't up to par; that could be a ploy to make you realize how good your team has it when what they're wearing now. And, let's be honest, people would buy up the retro jerseys when they come out like it's nothing. It'd definitely be a chance for people to get what they may have missed out on and can't readily get on the eBay.

Of course, whether or not most of these designs come back is another story. We all have a scheme that we hold near and dear to our hearts and regardless of how awful they may have looked at the time, the yearning for having those back onto the ice to rekindle the fond memories many had is always going to be present. This is one of the times where you have to envy the likes of the Montreal Canadiens and Detroit Red Wings, who haven't had many drastic jersey or identity changes since the 1970s.
Posted by ScottyWazz at 1:15 PM