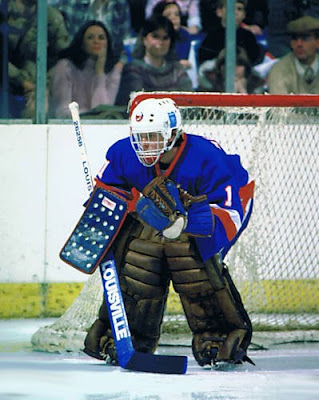 Sparked by the post from the New York Islanders photo day via Greg Wyshynski's Puck Headlines on Friday, it made me decide to go to Long Island again for this week's AGM. While this week's inductee was doing enough to get his name on the Cup three times, he seemed to get lost in the fold when it came to the overall picture. He was able to get a solid gig post-retirement thanks to people who were able to see what he could do for their career. This week, the profile of Roland "Rollie the Goalie" Melanson.

Melanson got his start with the New Brunswick Amateur Hockey Association with the Moncton Flyers, putting together 14 shutouts in 70 games of work for Moncton. Melanson would then move up to the OMJHL to play for the Windsor Spitfires starting in the 1977-78 season, playing in 44 games with a 4.51 GAA. More time for Melanson in the 1978-79 season with 62 games in and 4.40 GAA. After that season, Melanson was selected in the third round of the NHL Draft by the New York Islanders. Melanson stayed in the OMJHL in 1979-80 and would start off with Windsor for 22 games, going 11-8-0 before being dealt off to the Oshawa Generals, where he would finish the season, playing in 38 games and a 26-12-0 record to show for it.

For the 1980-81 season, Melanson went on his pro journey, starting in the Central League's Indianapolis Checkers, where he would play 52 games with a 31-16-3 record and a 2.57 GAA, before he would get the call-up to the show. Melanson would play 11 games with the Islanders that season, going 8-1-1 and then going 1-0 in three playoff games, getting in along for the ride for an Islanders' Stanley Cup victory. Melanson not only got a Cup ring, but Central League Rookie of the Year honors. Melanson would be with the Isles full-time int he 1981-82 season, backing up Billy Smith while getting in 36 games with a 22-7-6 record to show for it, then 0-1 record in three playoff games; as he would claim his second Cup with the Isles that season, as well. Melanson saw more time in the 1982-83 season, playing in 44 games with a 24-12-5 record and a 2.66 GAA, while in the playoffs, he would go 2-2 in five games as the Isles would win the Cup again, giving Melanson his third ring. Also in '82-'83, Melanson and Smith would win the William Jennings Trophy for lowest goals-against, while Melanson would also be named to the NHL's Second Team All-Star roster at the end of the year. In the 1983-84 season, Melanson would go 20-11-2 in 37 games for the Islanders, then 0-1 in six playoff appearances; but the Isles would lose in the Cup Finals, ending their dynasty. Melanson would return for the 1984-85 season, but only go 3-3-0 in eight games before he was on his way off the Island.

Melanson and Grant Ledyard were traded to the Los Angeles Kings for Brian MacLellan and a draft pick. Melanson would start off with the Kings' AHL affiliate New Haven Nighthawks, playing three games with a 1-2-0 record before getting called up to LA. With the Kings, Melanson played in 22 games, but had a dismal 4-16-1 record. Melanson would have his chance to be the #1 goalie in LA, playing in 46 games in the 1986-87 season with a 18-21-6 record, then going 1-4 in five playoff games. Melanson would get in 47 games for the 1987-88 season, but only sport a 17-20-7 record, then 0-1 in the playoffs. Melanson would only stick around for four games in the 1988-89 season, going 1-1-0 before being sent to New Haven, where he would play 29 games with an 11-15-3 record, but then going 9-8 in 17 playoff games, losing in the Calder Cup Finals to the Adirondack Red Wings.

The New Jersey Devils picked up Melanson as a free agent before the 1989-90 season and would put him with the Utica Devils of the AHL. That season, Melanson played 48 games, going 24-19-3, but then only going 1-4 in five playoff games. Melanson would be back in Utica for the 1990-91 season, sporting a 23-28-1 record in 54 games, as well as having a one game stint in New Jersey, playing only 20 minutes in a non-decision.

Before the 1991-92 season, Melanson was traded with Kirk Muller to the Montreal Canadiens for Stephane Richer and Tom Chorske. Melanson would only play nine games that year for the Habs, going 5-3-0. However, a reoccurring groin injury would limited his appearances.

Melanson would be without a gig for the majority of the 1992-93 season, but would sign on with the Colonial League's Brantford Smoke, where he would play 14 games in the regular season, going 9-3-1, but would explode in the post-season, going 11-3 in 15 games, helping the Smoke win the Colonial Cup and getting Playoff MVP honors on top of it.

One more chance for Melanson came in the 1993-94 season, playing with the Saint John Flames of the AHL, but he would only see seven games of action with a 1-2-0 record before hanging up the pads for his career.

Melanson wouldn't be out of hockey for long-- staying on with Saint John as a consultant before getting a job as an assistant coach for the QMJHL's Moncton Wildcats from 1995 until 1997. Then in 1997, Melanson would go on to be the assistant and goalie coach of the Montreal Canadiens until 2009. Currently, Melanson is the goalie coach of the Vancouver Canucks, many saying he's helped Roberto Luongo find his game again-- though it's up for debate.

While he did have his name on the Cup, he never really had a chance to shine by himself. When he was given the wheel, the team in front of him was often not up to snuff. Melanson has a lot to be proud of on the teams he played on and the achievements he had, as well as the career its allowed him to have post-playing career.
Posted by ScottyWazz at 8:15 AM