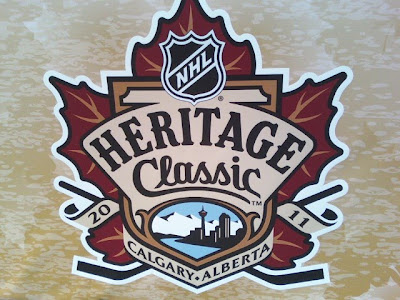 We're a little more than two weeks away from the Heritage Classic at Calgary's McMahon Stadium, where the Calgary Flames host the Montreal Canadiens in the second outdoor game in the NHL season. However, even as I go around town on my off days, the heat within the city doesn't seem to be as widespread as there has been for the Winter Classic or even All-Star Game. The hype machine seems to be reserved for some spots in the local papers and in sporting goods stores that are selling the event merchandise.

But what is the reason for the lack of publicity this thing is getting?? Lyle Richardson of Spector's Hockey and I discussed this twice on Face Off Hockey Show; including one that didn't get aired because of the snow.

One of the reasons is that this game is not part of the Hockey Day in Canada celebration, which is the week earlier. The thought behind this has to be that CBC could profit more from two different events than to combine them into one. It's all about the money, folks-- this shows. This game is actually part of Hockey Weekend Across America and specifically on the Hockey Day in America broadcast on NBC. CBC must be in cahoots with Evgeni Nabokov because they misjudged this whole thing, because what's more Canadian than outdoor hockey?? If there's a great way to end that day of celebration for hockey in Canada-- this would have been it. Yet, they saw a chance to get more viewers to put it on different dates and then put it in 3-D, which makes this a bit of a CF situation when you look back at it.

Another reasoning could be the match-up, many people may not see it as one to get excited about-- which I could understand. The rivalry is not like the Caps/Pens was, but these are two teams who faced off in two Stanley Cup finals back in the '80s-- there is a decent history between the two teams. Also, these teams are battling for a playoff spot; which seems a bit easier for the Canadiens, as the Flames are battling and clawing back from their early-season stumble. The match-up has a lot of underlying stories to it, aside from their match-ups in the Finals, but it because this is not one we regularly see-- it's something people may not understand the logic for it.

Finally, it could just be burnout of events for people. Let's be honest, this game is very late into the season and with the Winter Classic and All-Star Game proceeding it, fans could just be burned out from everything else. Plus, a week later, you have the trade deadline-- which many people will get hyped for and will get people to forget about this game, especially if it's bad. Yet, with not much promotion going into it and one of the most exciting non-game-days events happening a week after.....it's destined to get lost in the fold.

In time, this could be the forgotten outdoor game when all is said and done. With everything else preceding this, maybe fans are burned out from the pomp and circumstance that they just can't deal with the ending of this all and just want it to be over. Whatever it is, the fact is that while it'll be an enjoyable event-- it'll probably not be as fondly remembered as other outdoor games. Even so, I'll be lucky enough to attend-- so even if others may not remember it; I won't.
Posted by ScottyWazz at 10:25 AM