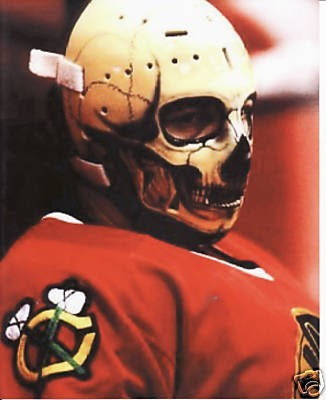 This week, we'll take a look at a guy who was at the Heritage Classic, but not used. In fact, it seems that for most of his career, his mask would get the most attention in the career rather than what he did while he was playing. And while he had a few moments in the sun, his skull mask shall forever live on. This week, the profile of Warren Skorodenski.

Skorodenski started off playing in Midget AAA with the West Kildonan North Stars in Manitoba before moving to the Western Hockey League with the Calgary Wranglers. In his first season with the Wranglers in 1977-78, Skorodenski played the bulk of games, but only had a dismal 8-22-10 record out of his 52 appearances. Things got drastically better in the 1978-79 season, with Skorodenksi playing in 66 games compiling a 26-31-5 record, then going 7-8 in the playoffs; losing in the division finals. After that season, Skorodenski was signed by the Chicago Blackhawks, but remained in Calgary for the 1979-80 season, where he would put up his best numbers, going 39-23-2 in 66 games, but a 3-4 playoff mark would have him bow out in the first round.

The 1980-81 season would see Skorodenski take the pro route, playing with the Flint Generals of the IHL for 41 games (sadly, no record available), while getting two games up with the AHL's New Brunswick Hawks, going 0-1-0. Skorodenski would stay in New Brunswick for the 1981-82 season, seeing 28 games, finishing with a 16-8-4 record, while going 0-2 in the playoffs. Along with Dan Janeyck; they won the AHL's Hap Holmes Award for fewest goals against. He also got a call-up to the Blackhawks for one game, which was a loss. The 1982-83 season would see him split between the AHL's Springfield Indians for 13 games (3-6-0), as well as being sent down for the bulk of the season to the Central League's Birmingham South Stars, where he would go 11-11-1 in 25 games, while going 0-4 in five playoff appearances. The 1983-84 season was a dicey one, as Skorodenski started out with the Sherbrooke Jets for 19 games (5-10-2), but an incident on November 20th of 1983 would see Skorodenski get suspended by the AHL for 20 games, as he assaulted referee Dave Lynch. When he return, Skorodenski would play 14 games with the Indians, going 3-11-0, then 0-2 in two playoff appearances.

Skorodenski played hard enough in training camp to win a spot on the Blackhawks main roster for the 1984-85 season, backing up Murray Bannerman. Skorodenski would going 11-9-3 in 27 games, with a solid .903 save percentage; highest in the league. Skorodenski played one game with the Blackhawks in the 1985-86 season, a loss, but a logjam in net relegated him to the AHL with the Nova Scotia Oilers, playing 32 games and having a 11-14-2 record to show. The majority of the 1986-87 season had Skorodenski back in Nova Scotia, appearing in another 32 contest with a 10-15-0 record, while receiving a call-up from the Blackhawks for three games, going 1-0-1. Skorodenski also saw time in the IHL with the Saginaw Generals, going 4-1-0 in six games; but then going 3-2 in six playoff contests.

The Edmonton Oilers liked what they saw in Skorodenski when he was in their minor league system, that they signed him before the 1987-88 campaign. Granted, he spent the majority of the time with Nova Scotia, playing 46 games with 25-15-5 record; Edmonton called him up for three games-- but all came in relief and wouldn't allow him a record. Skorodenski had one more kick in the Oilers' organization in the 1988-89 season, but it would be with the Cape Breton Oilers of the AHL, where he would go 11-13-1 before leaving the team.

Skorodenski finished out the 1988-89 campaign with the Canadian National Team, seeing 22 games of action and finishing with a 8-9-1 record. Skorodenski would stay with the National Team for the 1989-90 season, going 18-17-0 in 41 appearances traveling around the globe. One last gasp in the 1990-91 season had Skorodenski play only two games-- both wins-- for the National Team before he would hang-up the pads for good.

Sadly, I was unable to catch up with Skorodenski at the alumni game to see what he is up to, as he seems to have fallen off the map in the hockey world. While he did have a sweet mask, he could have been a lot more. He had flashes of brilliance, but at the same time-- never seemed to get the attention he needed to work on those flashes.
Posted by ScottyWazz at 8:15 AM