The Heritage Weekend That Was 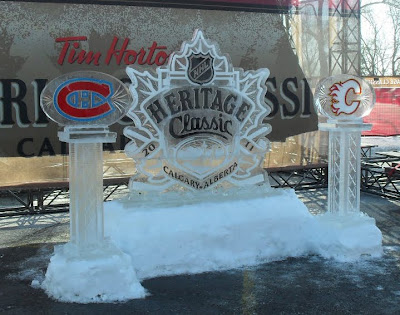 The pomp, the circumstance, the hand-warmers. The weekend that was in Calgary couldn't have been better done, even though the organizers couldn't control the weather-- one day, but not yet. From the Saturday practices and alumni game, to the big show of the Heritage Classic, followed by the WHL Outdoors game-- the festivities were something that many Calgarians and Canadians will remember for some time, especially if they can't get to another one.

The stadium was full of rabid fans, packed shoulder to shoulder and full of spirit(s). It showed that it was a game that was very much in demand and something that was needed for the city of Calgary. Granted, the revenue from sponsorships surpassed the Winter Classic's in the past shows that Canadian companies love hockey and will put their money to not only get their name out there, but to support something they strongly believe in. Of course, the outcome made it even better for more than half the crowd dressed in scarlet-red and yellow-- looking like a Fixin' Bar at a Roy Rogers from 1986.

When it came to the WHL game, it was so underground-- it didn't even have a proper name; it was just called WHL Outdoors. Even so, 20,888 showed up, which surprised me only because of the fact that it was a cheaper alternative and turned out to be a better day on a Holiday Monday. It also turned out to be a good game, with Regina scoring the game-winner with 36.2 seconds left in the third period and while they did set a CHL and Junior Hockey record single-game attendance-- it could have been so much more. Regardless, it was a success in terms of getting people out to see the two worst teams in the WHL in a thrilling game.

There has been little criticism when it comes to the Heritage Classic-- mainly with the scheduling of the game; and to that I agree. When this first outdoor game happened in 2003, it was in November and just as teams started to get their legs underneath them. The fact this game is with about a quarter of a season left and teams in dogfights-- it's something you really don't want to risk; having an outdoor game screw up things because one thing or another go wrong because of conditions. If you're playing this late and already playing catch-up, it's just puts you deeper in the hole if you can't win.

In any case, it was about the fans. The gauge I got from some of my friends that were there was this was an amazing event and well done by the league and Flames organization. The temperature didn't affect too many people, mostly due to the availability of booze and chicken soup-- or both into one. Fans enjoy the company of the rival, with little to no complaints being put out there to my knowledge. The weekend earlier was Hockey Day in Canada, but Sunday was a best encore you could have hoped for over-- then the hangover Monday sealed a great weekend of hockey in Calgary.

Would it be wise for the NHL to do two or more outdoor games a year?? If they want to go for the gimmick while it's hot-- then yes. However, with not many Canadian teams and few American locales you can have it at; it creates a difficult conundrum. You'd love to have this kind of exposure, but if you over do it-- the vibe of having that one game a year kind of gets a bit diminished. You have the Winter Classic and if there should be a Heritage game to be had, then go for it-- but you don't force it. Maybe have the Heritage every other year and build the hype that, but if you go over two for an NHL season-- it just becomes another game.

Semantics aside, the final product delivered beyond the lack of true hype it got. The people came out in droves and lapped up every bit they could. It was great for the city, the teams, and the league. It did what it's exact task and got interests from those who wanted to take interest in it. The setting was stellar, the weather was as many remembered when playing on that pond, and it will be a lasting memory for all who participated in it.
Posted by ScottyWazz at 7:00 AM