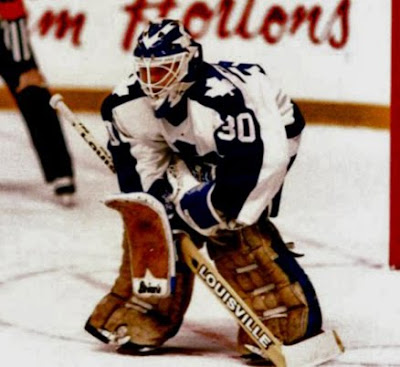 In a time where size is everything when it comes to goaltending, this week's AGM showed that you didn't have be big to play big. Yet, as the script goes, playing on a subpar team shows how much work one has to do, and if you hold you're own-- you have to rely on others to pick up the slack, as well. However, if nothing else-- he played for one of the better named teams in the IHL to end his career. This week, the profile of Allan Bester

Bester busted on the scene during the 1981-82 season, where he would play Junior "A" hockey with the Hamilton Kitty B's before getting a call-up to the OHL's Brantford Alexanders, where he had 19 games under his belt with a 4-11-0 record to end out his rookie year in the OHL. The 1982-83 season provided solid footing for Bester, who had a 29-21-3 record for the Alexanders and 3-3 record in the playoffs, allowing him to capture OHL First Team All-Star honors. That summer, Bester was 48th overall by the Toronto Maple Leafs in the 1983 Draft.

Bester would start out the 1984-85 season in style, getting his first win as a shutout, but would only play 15 games with the Leafs during the year, going 3-9-1. The rest of the time, Bester played with the AHL's St. Catherines Saints, going 9-18-1 in 30 games. Bester stayed in St. Catherines for the 1985-86 season, where he would be the starter and put together a solid 23-23-3 season for the Saints, then helping the team get to the Calder Cup Division Finals, but losing in seven games. Bester did get a one-game call-up to Toronto, but didn't factor in the decision.

While he started out with the now Newmarket Saints in the 1986-87 season (1-0-0), Bester would have a long ride in Toronto, playing in 36 games that season going 10-14-3 and appearing relief in a playoff game. Bester would back up Ken Wregget for the 1987-88 season, playing 30 games while going 8-12-5, as well as seeing five games in the playoffs, going 2-3 in the process. The play of Bester and Wregget's struggles allowed Bester to get the starting role in the 1988-89 season, playing in 43 games with a 17-20-3 record, but it was not enough to get into the playoffs. Despite some injuries in the 1989-90 season, Bester's 20-16-0 record allowed the Leafs to get to the .500 mark for the first time in a decade. However, Bester went 0-3 in four playoff games that year, as well as 2-1-1 in five games with Newmarket while conditioning to return. The 1990-91 season saw Bester start with the Maple Leafs, but after going 0-2-0 in three games-- he got sent down to Newmarket, where he would play 19 games there with a 7-8-4 record. Bester would get called-up for three more Leafs games and would finish 0-4-0 on the season before he would be moved.

At the trade deadline, Bester was traded to the Detroit Red Wings for a sixth round pick in the 1991 Draft. Bester would play three games to end out the 1990-91 season with the Wings, going 0-3-0. While Bester would start with the Wings in the 1991-92 season, he would only see one appearance in relief, then spending most of his time with the Adirondack Red Wings of the AHL, playing in 22 games going 13-8-0 and would have a huge playoff performance, going 14-5 in 19 games, helping Adirondack win the Calder Cup. Bester would win the Jack Butterfield Trophy for Playoff MVP. Bester was back in Adirondack for the 1992-93 season as the starter, playing in 41 games with a record of 16-15-5 record, then going 7-3 in 10 playoff games.

With no NHL contract, Bester signed with the Orlando Solar Bears of the IHL for the 1995-96 season, where he would spend 51 games playing in two stints-- compiling a 32-16-2 record. With his stellar play in the early going, the Dallas Stars signed Bester in January of 1996, where Bester would play 10 games with a 4-5-1 record, before returning to the Solar Bears for the playoff, going 11-12 in 23 games, as they would lose in the Turner Cup Finals. Bester was back in Orlando for the 1996-97 season, being a workhorse for the Solar Bears in playing 61 games with a stellar 37-13-3 record, then going 4-4 in 10 playoff games. One last kick in the can for Bester in the 1997-98 season, but he would only play 26 games for the Solar Bears due to an ankle injury, going 13-8-1, then 1-0 in two playoff games. After that season, Bester hung up the pads for good.

Post-retirement, Bester stayed in Orlando and at last check was the regional sales manager of the Holiday Inn Florida Region. Bester also played in many Oldtimers games, as well as playing for the Leafs Alumni during the 2000 All-Star Weekend.

While he didn't have the best teams in front of him during his NHL career, he made the most out of his opportunities and displayed them when he got later on into his career in the minors. While he was able to get more playing time while in the minors, he probably would have liked to be in direct contact with a NHL team rather than in independent minor league team, even with the great numbers he put up.
Posted by ScottyWazz at 8:15 AM

My most prominent memory of Alan Bester is from one of the first few "Rock 'em, Sock 'em" videos when Grapes said "He sees more rubber than a dead skunk on the Trans-Canada highway".

I remember my uncle played for the Solar Bears for a while. His wife was understandably upset when he got the call in January that he'd been traded to the Moose.

He is the main reason I became and stayed a goalie myself... Bester is Best... The only reason the Leafs made the playoffs in 1988, replacing Wregget after team was down 3-0 in a game they had to win, neeless to day he earned a shut out, and the Leafs a spot in the post season with a 5-3 win.
Glad to see he is being talked about after all these years.
Don

A book called the Hockey Companion (or Compendium, can't remember which) did an analysis of 80s goalie stats that came out very favourable to Bester - I think he was the second-best goalie in the league one year.