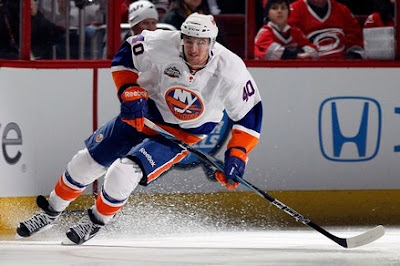 The theory that no matter how good a rookie is at the start of the season; there will be a darkhorse rookie to tear it up in the second half to win the Calder Trophy. In addition, Jason Spezza is always in the running.

That's how the savant of the Face Off Hockey Show believes the Calder race always turns out. Last year was true, as many thought it could be John Tavares or Matt Duchene-- but Tyler Myers walked away in a runaway over Duchene and Jimmy Howard. Steve Mason caught fire in 2009, while Andrew Raycroft in 2004 over Michael Ryder and Barret Jackman in 2003 over Rick Nash and Henrik Zetterberg.

At the start of the year, many thought it would be one of the Edmonton trio of Taylor Hall, Jordan Eberle, or Magnus Paajarvi (Svensson). When they got off to a slow start, Logan Couture of San Jose kind of took the reigns over. Even with that, Jeff Skinner of Carolina has caught fire as of late, but even now-- Michael Grabner on Long Island has come on as of late, although he could be frowned upon because he's up for the Cy Young Award for more goals than assists.

The big thing with the theorem, and it's genius from Sean, is that for the most part-- most rookie usually can't keep up a torrid pace for a long season; especially when they're still getting their feet wet with the pace from the jump up in ranks. At the same time, you can really tell the elite guys that can actually maintain their pace throughout the season-- though a few have had a sophomore hiccup; then regaining their composure mid-way through the season or the season after. Then again, there's guys like Raycroft who fall off the map after one good season or Jackman, who has been proned to injuries through his career.

We still have time to see if the theorem holds true, but by the looks of it-- Sean-O could have another notch in his belt with this moral victory. If he could only get that Washington/Vancouver Stanley Cup final-- he'll be gold.
Posted by ScottyWazz at 10:20 AM