Taking the ASG Outside 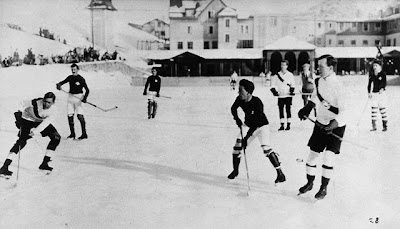 It's time for All-Star Weekend, with many people begrudgingly accepting this game and many refusing to watch and maybe shoveling themselves out of the snow-maggedon that's happening throughout the continent. But is there something that could actually make people take interest in this whole thing again, because it is a glorified shinny game-- we can all agree on that.

The only answer to this-- take it outside. Make the All-Star Game the Winter Classic and away you go.

There is an understanding that the NHL won't let this happen because you're combining two big moneymaking ventures and putting it into one, which not only takes away a revenue day for the NHL, but takes a revenue day away from another city. That alone could make it a deterrent for people to get on board, especially after the NHL is in its fifth year of revenue growth, which you can probably bank is on its ability to get sponsorship for their special events like the All-Star Game and Winter Classic as separate entities. Yet, while the money will be the big factor, that's about all I can see as a turn-off to making two become one, like so much Spice Girls. It almost seems like it makes sense in all honesty on a number of reasons.

First, while the appeal of playing a regular season game outside is something amazing, the fact remains it still is a league game and if push comes to shove, it could turn into a turning point in the standings for one of the teams if the conditions are perfect or they lose a player to injury because of the conditions. The All-Star Game as the Winter Classic could be something where the speed isn't going to be a factor, because it's already at a slower pace than a regular season game. Plus, there's not going to be much contact, thus the rate of injury from that goes down. The only concern is the ice condition, which could play a factor, but I don't know how much of one in the end since Dan Craig is a G-D magician with the conditions of the ice.

Second, players may not be inclined to decline an invitation because they want the weekend of rest. Now, injuries have played a factor into the lack of star power, but when the rosters were revealed, the amount of head-shaking of the "snubs" was monumental or something. But players may want to have the experience of playing outside and wouldn't have their GM lobby to keep them off the roster to rest if they want to participate something on this scale. Granted, you'll have situations like Jarome Iginla and Roberto Luongo dealing with family-- which is noble and family comes first. However, if it's just precautionary-- then it's a disservice to the league to have their best players sitting out because they don't want to "exert" themselves with this game.

Third, the outdoor game could go anywhere, which is something that the Winter Classic can't promise. The fact of the matter is that the Winter Classic is a game that's usually reserved for a match-up people will watch on TV; like the Caps/Pens and the Hawks/Wings. That means that most teams won't be apart of a match-up on the Winter Classic, even if they have some kind of stars on their team-- like Rick Nash on the Blue Jackets. This All-Star Game does a lot of the league-- it displays the stars of each team on a giant scale and if it's outside, you know the buzz will be there because people will watch the outdoor game even if they aren't interested in the outcome of the All-Star setting. It will also allow the game to travel around to markets that may not get a Winter Classic game because it's not a prime destination to make ice, even though like I said-- Dan Craig is a magician. Fans in those locales will enjoy seeing this possible once-in-a-lifetime event and see all the stars play like how they learn-- from a frozen pond.

The biggest stopping point is the money and revenue that the separate events bring in. If you combine the two into the one event, it slices the revenue in half and will probably kill a lot of the travel and buzz about the Winter Classic since it's a gimmick within a gimmick. Fans may not buy into it, but to make people care about the All-Star game-- player and fan alike, this seems like a no-brainer. But, with money being the biggest thing that comes in from both of these-- it'll probably never happen at all.
Posted by ScottyWazz at 10:45 AM