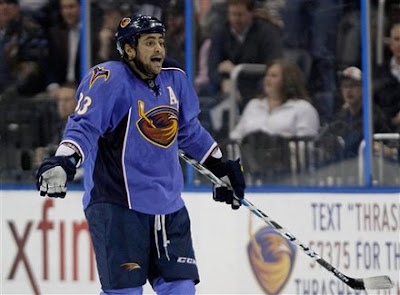 While most teams are the official 41 game halfway point of the season, when it comes to the Hart Trophy race for most valuable player-- some may think it could be a wide open field as we come down the stretch. However, in my eyes; it's a two-horse race. Granted, I actually take the literal description of the award, being the most valuable to his team.

The first is a no-brainer in Sidney Crosby. You take him off the Penguins and they probably aren't in the hunt for the President's Trophy for most points in the season. I don't like him as a player, but I respect him.

The second one will make you go, "Oh look-- Scotty's going for a gimmick." I'm not. I truly believe that Dustin Byfuglien should get a look at the MVP. Of course, you won't get many voters actually taking the literal meaning of the award, but it should be brought back to that; much like the Norris Trophy should be going to the best all-around defenseman, not the one with the most points.

As much as people say Byfuglien should be getting a look at the Norris for converting back to defense this year, his addition to the Atlanta Thrashers has seemed to revitalize a team that many thought were going to be a pushover in the first post-Kovalchuk season in the ATL. Most publications had them out of the playoffs, even if not by much. Yet now, the Thrashers are in a playoff spot and don't seem like letting up and I think a lot of it has to do with the energy and experience Byfuglien brings to the squad.

Personally, Byfuglien has a career-high in points and assists halfway through the season and only needs four more goals to have a career-high in that stat as well. He's finally getting to have his star realized after an amazing playoff season. For the team, he has been involved in 31% of the team's goals and had his hand in 54% of the power play goals the Thrashers have had. I don't know if they would have this same success without him in the line-up.

There will be plenty who will bring up Steve Stamkos or Henrik Sedin, which is definitely correct in that-- but at the same time; Stamkos has St. Louis helping him out and having close enough stats to him and Sedin has brother Daniel. While they have good stats, if you take them off the team; is the team still as good?? It's a fine line when you go with the literal sense of the award against the best player overall.

This plea will probably fall upon deaf ears should Byfuglien falls off the pace he's going or if someone else steps up big-time in the second half, but as of right now-- Big Buff has to be considered, even if it's in passing.
Posted by ScottyWazz at 9:25 AM