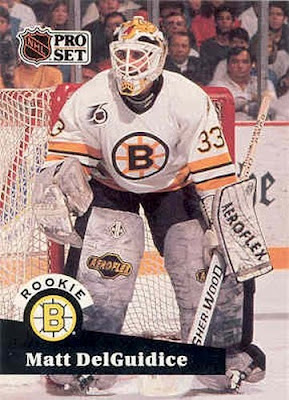 Usually, I don't do guys who have had fewer than 20-some games in the the NHL, but I think I'll make an exception on this for a number of reasons. First, he had those fantastic Aeroflex pads, which were before their time. Second, he played in Roller Hockey International, and third-- he went from a Division II school to a prime Division I school, then onto the NHL and minor pro leagues after that. This week, we look at the career of Matt DelGuidice.

Starting off with the East Haven Comets in the Connecticut High School system, DelGuidice started his trek to a pro career playing in the NCAA with St. Anselm College, playing Division II hockey with the Hawks for the 1986-87 season. He would play 24 games with a 5-11-3 record, but sported a solid .916 save percentage in that year and was able to get Second Team All-American honors. The Boston Bruins picked DelGuidice in the fourth round of the 1987 Draft. After that, DelGuidice moved to bigger condition by joining the University of Maine team, but had to sit out the 1987-88 season because of his transfer. Coming back in the 1988-89 season, DelGuidice split time with Scott King, playing in 20 games with a 16-4-0 record, then going 3-1 in the post-season.. Back for the 1989-90 season, DelGuidice would play 23 games behind King with another 16-4-0 record and yet another 3-1 record in the post-season in five games of play.

With his college career over, DelGuidice went into the pro ranks with the Maine Mariners of the AHL for the 1990-91 season, where he would take over the starter's role in playing 52 games with a respectable 23-18-9 record, as well as a 1-1 record in two playoff games. DelGuidice also got a call-up to Boston, where he would play in one game in relief of Andy Moog. The 1991-92 season saw DelGuidice take over the back-up role out of training camp and getting some time in net during his two stints in Boston. He would get 10 games in for Boston, going 2-5-1. As he was put back to the AHL, he wouldn't fair so well with the Mariners with a 5-15-0 record in 25 appearances. As the Bruins affiliate moved to Providence in the 1992-93 season, so did DelGuidice, but he would only play nine games with Providence, with an 0-7-1 record. He was also shipped to the IHL's San Diego Gulls, playing in one game, a no-decision.

Without a contract in the NHL with the 1993-94 season, DelGuidice would bounce around the minor leagues, spending most of his time with the Raleigh IceCaps of the ECHL, playing in 31 games with a solid 18-9-4 record, then a 6-6 record in the playoffs. He would also spent time in the AHL, playing in five games for the Albany River Rats (1-2-2) and one game for the Springfield Indians (0-0-1). It was another nomadic year for DelGuidice in the 1994-95 season, where he would play in the ECHL, mostly for the Nashville Knights; where in 18 games, he would post a 7-8-2 record and 0-1 record in two playoff games. DelGuidice would make stops with the Charlotte Checkers of the ECHL for five games (2-2-1) and then in the IHL with the Atlanta Knights for one game (no decision). Things settled in the 1995-96 season, where DelGuidice would play with the ECHL's Roanoke Express, playing in 35 games with a 13-10-3 record; then another 0-1 record in two playoff games.

The 1996-97 season brought a new chapter and new league with DelGuidice, as he would play in the Western Professional League with the Amarillo Rattlers. In the first season, DelGuidice would go 13-26-7 in 49 games on a team that had 17 wins all season. The 1997-98 season wasn't much better, as DelGuidice would see only 31 games in net with a 7-17-4 record with Amarillo before getting traded to the Monroe Moccasins, playing for 16 games with a 9-7-0 record. DelGuidice would stay in Monroe for the 1998-99 season, though he would only play in eight games sporting a 5-3-0 record before getting traded to the Corpus Christi Ice Rays, where he would play only four games, finishing with a 1-2-1 record. That would lead him to hanging up the pads after the season was finished.

Mentioned in the opening that DelGuidice played in the RHI, which was a summertime roller hockey league. DelGuidice would play for three summers from 1994 until 1996, compiling a 11-16-4 record in 37 games split between the San Diego Barracudas, the New Jersey Rockin' Rollers (two stints), and the Ottawa Loggers.

While he has dipped out the spotlight, the experience and travel miles DelGuidice logged after being lost in the Boston Bruins system is something that makes him an interesting subject. From one league to another, ice to roller-- he definitely made the most of his career. Starting with a Division II team, then being good enough to move to Division I with a solid program; he had promise-- but like always-- a bump in the road ruins everything.
Posted by ScottyWazz at 7:35 AM

I loved those aeroflex pads he had when I was a kid! he really bounced around a lot but kudos to him for sticking it out for so long.

A lot of incorrect info... but we enjoyed reading it anyway!!!!

Let it be known, I went from the HHOF and HockeyDB for the records. By all means, please correct the incorrect-- I'd rather have it accurate.

Well I know he trained for the Olympic teams too, there's a photo of it in his office :) I'll ask him to take a look at this!

Hey Scotty thanks for the article a couple of things i played 2 years for East Haven Yellow Jackets then 2 years for Notre Dame winning state title my senior, then a PG year at Williston Northampton Prep winning Div 2 title, at St A's my record was 13-11-3 , i also trained with Team US for the last Labbats Blue Canada Cup in 91, one of four goalies invited, playing half game aginst Team Canada in Montreal ,also was on the US Olympic Team pre Olympics in 91 .. made a stop in Germany playing in their elite league for 2 months in 93..the rest is pretty accurate and yes it was a strange long trip , it might have been different had i been with another organization..Thanks again, Juice

What happened to the beautiful hair he had while playing for U of M...... Glad life turned out good for him..