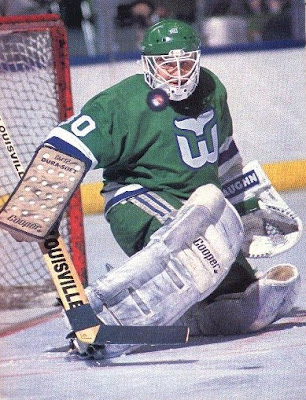 We'll kick off the new year with a tongue-twister of a last name in order to get this out of the way and get a clear head after the kick off to 2011. This goalie was well known for being the first goalie for the Ottawa Senators, which could be the last time they had a solid goalie. In any case, this week, the profile of Peter Sidorkiewicz.

Born in Dabrowa Bialostocka, Poland; Peter's family moved to Oshawa, Ontario when he was at a young age. Sidorkiewicz actually started playing goalie by happenstance as no one wanted to play goalie on his club team, so he volunteered. Sidorkiwicz would get into the Oshawa minor hockey system, playing junior B with the Oshawa Legionnaires in the 1980-81 season playing 22 games before getting called up to the Oshawa Generals of the OHL, playing seven games that season and going 3-3-0 and 2-2 in five playoff games. Seeing him as an investment, Sidorkiewicz was picked in the 5th Round of the 1981 Entry Draft.

The 1984-85 season had Sidorkiewicz turn professional, heading to the IHL and the Fort Wayne Komets, where he would play for 10 games with a record of 4-4-2. After that, he would get the call to the minor league affiliate of the Washington Capitals, the Binghamton Whalers, whom the Caps split with the Hartford Whalers. Sidorkiewicz would play 45 games in Binghamton with a 31-9-5 record for the season, then going 4-4 in eight playoff games.

Midway through the 1984-85 season, the Whalers liked what they saw in Sidorkiewicz that they traded for him and Dean Evason for David Jensen. Sidorkiewicz would stay in Binghamton for the 1985-86 season, where he would play 49 games, but had a letdown from the prior season, going 21-22-3 with a short playoffs of only four games with a 1-3 record. There was a bounce-back year for Sidorkiewicz in 1986-87, appearing in 57 games with a 23-16-0 record, then going 6-7 in 13 playoff games that post-season. For the 1987-88 season, Sidorkiewicz felt a bit of pressure to succeed, but had a so-so 19-17-3 record in 42 games. Yet, he was able to get a call-up to Hartford for a game, a loss.

After a stellar camp, Sidorkiewicz was able to make the cut for Hartford and would split plenty of time with Mike Liut in the 1988-89 season, ending up with a 22-18-4 record on the season in 44 appearances. Canada would pick Sidorkiewicz for the World Championship, but saw only a fill-in role for 25 minutes, as well as being named to the All-Rookie Team. With him playing so well, Sidorkiewicz allowed the Whalers to look to the future in the 1989-90 season, which saw Sidorkiewicz split time before Liut was traded to Washington and had Sidorkiewicz take over the reigns. That season, Sidorkiewicz would go 19-19-7 in 46 appearances, then 3-4 in the playoffs. The 1990-91 season had the new era of Sidorkiewicz as the starter of the Whalers, which saw him play in 52 games and put up a 21-22-7 record, then playing six playoff games with a 2-4 finishing spot. Sidorkiewicz had a shaky 1991-92 season, seeing former AGM Kay Whitmore taking more of his ice time, as well as being hampered with an ankle injury late in the season, which made the Whalers trade for another AGM; Frank Pietrangelo. Sidorkiewicz had his spot usurped, only playing in 35 contests and finishing with a 9-19-6 record. With expansion happening, Sidorkiewicz was left unprotected for the 1992 Expansion Draft.

That next summer, Sidorkiewicz was traded to the New Jersey Devils for another AGM, Craig Billington and Troy Mallette, plus a fourth round pick. The 1993-94 season, Sidorkiewicz would bounce around between the IHL's Komets for 11 games (6-3-0), the AHL's Albany River Rats for 15 games (6-7-2), then getting three games with New Jersey (0-3-0, all in relief). The 1994-95 season had Sidorkiewicz play in Fort Wayne, but behind many goalies-- which saw him play only 16 games, with him sporting a 8-6-1 record when all was said and done and a 1-2 record in the playoffs. Sidorkiewicz would be back in the AHL for the 1995-96 season with the River Rats, backing up Mike Dunham and getting in 32 appearances; though with some success with a 19-7-5 to get back on track. That showed when he was able to take the starter's spot in the 1996-97 season, which saw him play 62 games, finishing with a 31-23-6 record, then a 7-8 playoff record in 16 games. The 1997-98 season was the last kick at the can for Sidorkiewicz, as he would play for Albany yet again, going 21-15-5 in 43 games; while getting a call-up to New Jersey to play in one game, a no-decision.

After that season, Sidorkiewicz would retire from hockey. He held the all-time wins record in the AHL at 171 wins, but has been broken many times over. Sidorkiewicz has moved into coaching, being a coach to the OHL's Erie Otters for the past 12 seasons, including a season and a half behind the bench from 2006 to 2008. In 2002, Sidorkiewicz was named to the Binghamton, New York Hockey Hall of Fame.

For a goalie who was once called "Peter Alphabet" by an announcer, he didn't do too shabby for a career in the minors and in juniors, despite getting into goaltending on a whim because no one else wanted to play in net. He made a decent NHL career in some of the less than ideal situations-- especially in Ottawa. Take that one expansion year out of the mix and who knows if he could have bounced back from a rough end of his Hartford era.
Posted by ScottyWazz at 8:15 AM

I remember watching him play in that All-Star game! Despite some bad stats that year in the NHL, he did play pretty good for a very poor Senators teams.