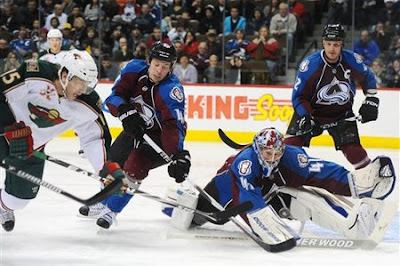 The Winter Classic has come to a close for another year, so we now speculate on where it's going to be held next. There's been two Eastern Conference Classic's in the past two seasons, so you have to believe that there needs to be a Western Conference Classic coming up, though many of the East Coast biases would say the Heritage Classic in Calgary denotes one.

Regardless, the no-brainer is either a Colorado Avalanche at Coors Field or Minnesota Wild at TCF Bank Stadium or Target Field location for the next Winter Classic. Both are very hockey mad cities, both have the climate to be able to hold a Winter Classic (though this year's showed that the NHL ice crew can do anything in any climate), and there's a rivalry that each team could have. In fact, I think it's a great idea to have the two teams face off against each other; mostly so we don't have a repeat team.

However, the idea of a Minnesota Wild and Dallas Stars game isn't horrible, if you put the Avs and Wild against each other, it's the two US teams from the Northwest Division, who get lost in the coverage because of the fact they are in with three other Canadian teams and play at insane times for being on the West Coast. Minnesota's hockey resume definitely speaks for itself, while Colorado is a two-time Cup winner and have had a lot of greats and future greats pass through their organization. It's a great display of good young talent out there.

That said, many would want to have the Winter Classic contain someone like the Detroit Red Wings or Chicago Blackhawks again, or even the Los Angeles Kings in order to get some ratings in, but sadly-- it's not always about ratings. Especially against a Pens/Caps Winter Classic which drew the best NHL ratings in 36 years. You cannot top something like that and you should put this gimmick to bed on a high-note-- but you won't because it's a great revenue generator and could be a reason to spotlight young teams who wouldn't normally get the big TV coverage.

The bottom line, the next Winter Classic has to be out west. If the idea of this is to truly grow the game, get past the Mississippi River once and a while and get those teams some TV time on the big stage. Also, no repeats-- because....come on, what fun is that if you keep having the Red Wings or Penguins or Capitals or Blackhawks in this game??

(Let it be known, I'm all for a Boise State Bronco Stadium game with the Phoenix Coyotes wearing the Winnipeg Jets blue's while on the blue turf.)
Posted by ScottyWazz at 11:35 AM

as a Leafs fan (shamed to admit it though), I would love to see an outdoor game with the Habs VS Leafs!