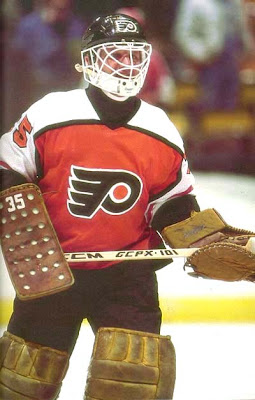 With the All-Star Weekend come and gone, we touch into the archives for probably one of the more unheralded winning goalies from the annual display of stars. That same year was his best year to date, but he was also considered disposal and led the way for the start of Ron Hextall's career. From being denied credit for a goal and being the first NHLer to sport a water bottle on the net; this guy had plenty of ups and down. This week, the career of Bob Froese.

Hailing from St. Catherines, Ontario, Froese started his road to the NHL in the OHA (modern day OHL), playing in 146 games between the St. Catherines Blackhawks, Oshawa Generals, and Niagara Falls Flyers from 1974 to 1978. Though he didn't sport the best stats, which included a 5.01 GAA, he was selected by the St. Louis Blues in the 10th round of the 1978 NHL Draft.

As you can tell, not many stats were recorded for Froese during his playing career before he went into the NHL, which showed during his tenure in the IHL starting in 1978-79 with the Saginaw Gears, where he would play 21 games with a 3.31 GAA, then he would be loaned out to the Milwaukee Admirals for 14 regular season games (5-5-1, 3.52 GAA), then seven playoff games. Froese would return to the Gears for the 1979-80 season, playing in 52 games with a 3.38 GAA, also getting a call to the AHL's Maine Mariners, losing the only appearance he had. Froese would play in 43 regular season games with Saginaw in 1980-81, sporting a 2.98 GAA. Froese would also go an amazing 12-1 in 13 playoff games in 1981, helping the Gears win the Turner Cup.

After that Championship performance, Froese signed with the Philadelphia Flyers and was moved up to the AHL with the Maine Mariners to take part of a trio of himself, Sam St. Laurent and Pelle Lindbergh. Froese would get 33 games with the 1981-82 Mariners, going 16-11-4 for the year. For the 1982-83 season, Froese played 33 games in Maine, going 18-11-3 before getting the call to move up to Philadelphia, where he would play 25 games and going 17-4-2 in his stead.

Froese was who the Flyers turned to in the 1983-84 season, where he would be the starter with Pelle Lindbergh as his back-up. With 48 games that season, Froese was able to put up a 28-13-7 record. However, the 1984-85 season saw Froese start off well, going 7-0-0 before he strained some ligaments in his knee, sidelining him for 18 games. He would make an appearance in the AHL as rehabilitation for four games (1-2-1), before being called back up to Philadelphia-- but by that time, Lindbergh surpassed Froese in play, relegating Froese to only 8 more games for the season, finishing 13-2-0 on the season.

The tandem of Froese and Lindbergh was something of solidarity rather than competition. Lindbergh suffered from dehydration, which caused him to bring a water bottle to the ice. Froese was credited for being the first NHLer to strap it to the top of the net with velcro during the playoffs, though Lindbergh was the first to many people to start the water bottle feat. Yet, from prior AGMs we know that Chris Terreri and Scott Gordon were the first to both have water bottles on the net.

In any case, the 1985-86 season was a heartfelt one for the Flyers. While Froese lost out on the top spot to Lindbergh. However, that changed when Lindbergh tragically died in a motor vehicle accident in November of 1985. It was Froese who had to fill the skates that Lindbergh had left, and he did the team proud, going 31-10-3 with a 2.55 GAA. He won William Jennings Trophy for least goals against with Darren Jensen, was the winning goalie in the 1986 All-Star Game, plus he was named to the NHL's Second Team All-Star after the season.

The 1986-87 season was an interesting turning point for Froese. He would start with the Flyers, but would only play three games (all wins), but would be pushed out by the emergence of Ron Hextall and signing of Glenn "Chico" Resch. Froese was expendable and shipped to the New York Rangers for Kjell Samuelsson and a second round pick. With the Rangers, Froese would play 28 games behind John Vanbiesbrouck, going 14-11-0; plus an invite to play for Canada in the Wold Championships, where we would go 1-3-1 in five games. Froese would once again be behind Vanbiesbrouck in New York for 1987-88, getting into 25 games, but with a disappointing 8-11-3 record; while in 1988-89, Froese's workload would increase to 30 games, but a 9-14-4 record would all he have to show for the increased games. Froese would only see 15 games in the 1989-90 season, as Mike Richter would come from the Rangers system to play amazingly and usurp the back-up position. After going 5-7-1, Froese hung up the pads.

Currently, Froese found God and is the head Pastor at the Faith Fellowship Church in Clarence, New York.

Froese did a great job while in his playing career, especially when trying to overcome a tragedy that shocked the entire team and city. With 128 NHL wins, an All-Star appearance and victory, his career isn't anything to be ashamed of. While he may have dipped out of the hockey spotlight, he continues to lead his life to a higher calling; which seems to suit him just fine.
Posted by ScottyWazz at 8:15 AM

another great AGM. Nice writing! I always though Froese career was a bit strange considering how dominant his one year in the spot light was!